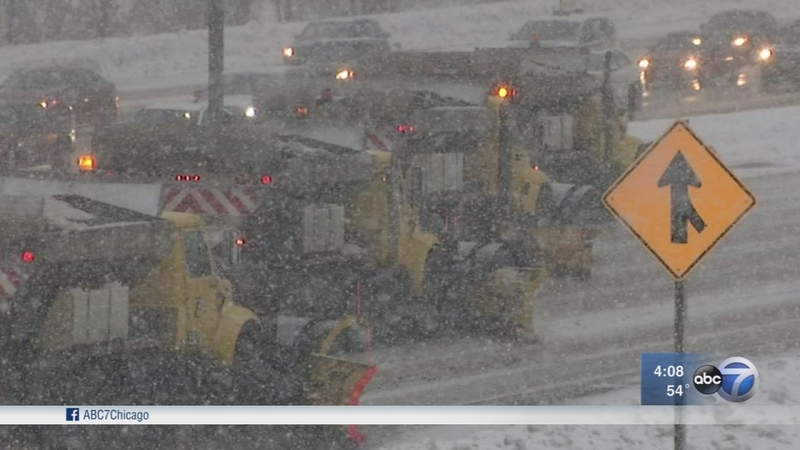 Prepare for winter on roads and rails

CHICAGO (WLS) -- Harsh winter weather can sneak up on people in the Chicago area, especially after unseasonably warm days like Tuesday.

But it's a good idea to winterize vehicles before temperatures drop and the snow falls.

The Illinois Department of Transportation, Illinois State Police and the Illinois Tollway kicked off their new "Winter Weather - Get it Together" campaign Tuesday.

"Winter is coming. We want them to be prepared. Understand that if it's not necessary to go out, don't drive," said Hiram White, IDOT operations manager.

Drivers were reminded to never follow a snow plow too closely and that black ice on roads looks clear, but it can be treacherous.

Officials said every vehicle should have an emergency car-care kit that includes jumper cables, flares, blankets, non-perishable food and a first-aid kit.

"Always keep your gas tank at least two-thirds full. If you get stranded, you want to be sure you have enough gas to keep your vehicle running and to stay warm," said Captain David Byrd, Illinois State Police.

When winter weather is on the way, IDOT uses operational forecasts to determine pavement temperature and whether to plow or salt.

"In fall and spring, you can have a wide difference on what might fall and stick on a picnic table - maybe 2 or 3 inches - and maybe just a half inch slush on the pavement," said Meteorologist John Boyl, Weather Command.

Driving a six-ton IDOT salt-and-snow plow requires a lot of concentration because there are so many elements to deal with. But that is not the biggest challenge.

Motorists should always give plow drivers the right of way. Just because drivers can see them does not mean they can see those drivers. Remember Scott's Law: slow down and move over for stopped emergency and maintenance vehicles.

The harsh weather can also contribute to train delays. Metra CEO and Executive Director Don Orseno spoke Tuesday about how the company is preparing for the coming winter.

Those preparations include inspecting switches and heaters. Snow and ice can build up on the switches, bringing trains to a stop. Snow plows have also been tested. More than 3 million pounds of salt have been stockpiled.

"We've also increased our department for Twitter and our social media. They've done an excellent job this year of reaching out to our customers and letting them know what we have going on," Orseno said.