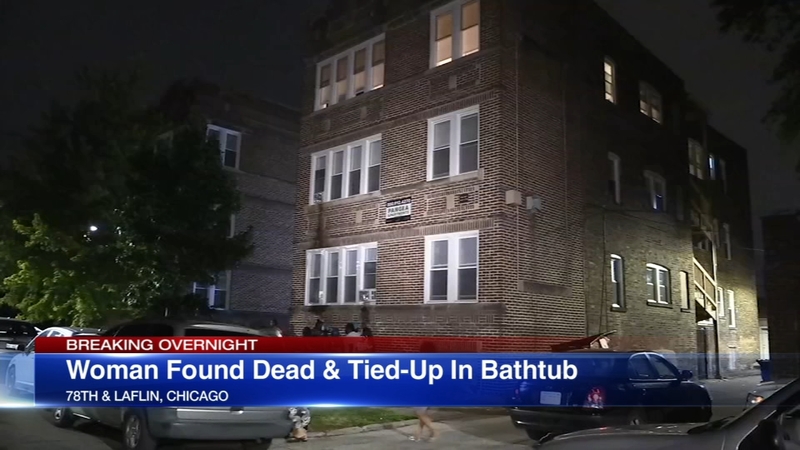 CHICAGO (WLS) -- A single mother of two was found dead in a bathtub in the Gresham neighborhood Sunday night. Police said her hands and feet were tied together.

Monday, the victim's family came back to the home after the horrific discovery.

The victim was identified to the Cook County Medical Examiner's Office as 32-year-old Shantel Boler, known by family as Robin.

The victim's family said Boler was found by her mother and aunt in the bathroom.

"It's horrifying," said Tytearyia Williams, who lives across from the victim. "It's terrible because I live right next door to this."

Williams was Boler's neighbor and came home Sunday night to police squad cars in front of her apartment building. It wasn't until later that evening that she found out her next door neighbor was found dead.

"This is heartbreaking," she said. "Somebody was tied up and tortured. That was very sad."

Police said the victim was found in an apartment building in the 1500-block of West 78th Street at about 8:58 p.m. Neighbors said Boler lived on the third floor with her two young boys.

Boler's family told ABC 7 the victim's mother hadn't heard from her in several days, so her mother and aunt went to her apartment to check on her.

When they opened her bathroom door, several flies flew out and then they found her in the bathtub with her hands and legs bound together.

"People really do sick things," Williams said. "I just don't get it."

"It's crazy how you can look at somebody and actually be able to do that to an innocent woman," said neighbor Nolan Bullock.

Boler's aunts and sister said Robin was a wonderful mother who would do anything for her children and now because of one person, her two boys will never get to grow up knowing just how wonderful of person she was.