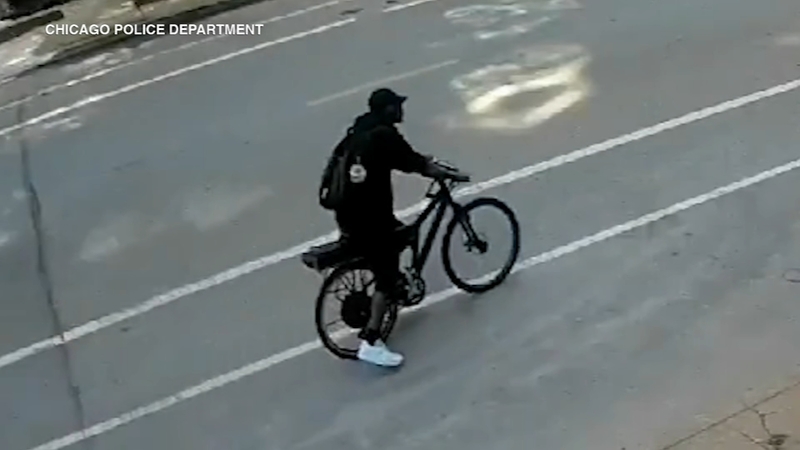 CHICAGO (WLS) -- Police are searching for a man who on a bicycle who shot a woman Wednesday in the Fulton River District, just blocks from downtown Chicago.

The shooting occurred around 11:50 a.m. in the in the 200 block of North Milwaukee Avenue, west of the Chicago River. The 29-year-old woman was walking to lunch with coworkers when a man rode by on a dark mountain bike and shot her in the back, according to police.

The victim was taken to Northwestern Memorial Hospital. Her condition has been stabilized and she's expected to survive, police said.

Chicago police believe the woman may have been targeted, but they said they haven't had prior contact with her through past complaints or orders of protection.

Witnesses described the suspect as a man wearing a black hat and black T-shirt. He was captured by multiple surveillance cameras pedaling away.

CPD Spokesman Anthony Guglielmi released surveillance video of the offender on a bicycle armed with a handgun.

Video located by detectives shows an offender on a bicycle armed with handgun. Anyone seen in the area matching this description should be reported to 911 or anonymously at https://t.co/g9Q1SrKRdK pic.twitter.com/MFDuQS7jhM

"It happened so fast, I didn't know what happened," said Charles Williams, a witness. "I thought it was a firecracker at first, but when I see the lady lying on the ground, I said, 'Damn, I think somebody got shot.'"

"And you know, it's like twelve o'clock in the afternoon. Nobody expects anything like that," McGee said.

A woman was shot and wounded Wednesday in the Fulton River District, just blocks from the Loop.

No one is in custody at this time, according to police.