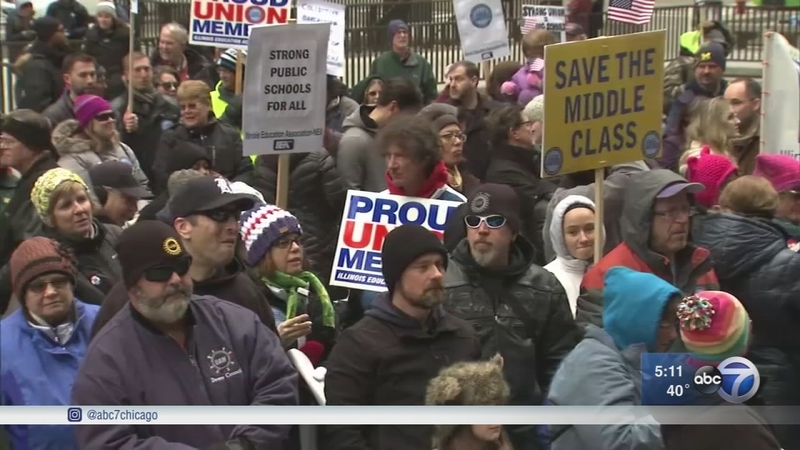 CHICAGO (WLS) -- Hundreds took to the streets for the Working People's Day of Action Saturday in their fight to stop what they call continued attacks on unions and public education.

Union workers and others gathered at the Daley Plaza for an afternoon rally, which organizers say is a part of the largest nationwide grassroots movement since the women's march.

"Today, working people from across Illinois have joined us here in Chicago to continue the fight," said Rob Reiter with the Chicago Federation of Labor.

The labor rally got the support of the Chicago Teachers' Union along with some parents and students, who staged a protest of their own as they marched in solidarity against the planned closure of NTA in Chicago's South Loop and several Englewood schools, one of which is attended by 16-year old Miracle Boyd.

"Everybody should have the same opportunity," said CPS student Miracle Boyd.

The group stopped at CPS headquarters and at Chase bank, one of the board's biggest lenders, before joining the labor rights rally.

This rally comes just two days before the U.S. Supreme Court is set to hear a case people here say is yet another assault on unions.

On Monday, the U.S. Supreme Court hears the Janus versus AFSCME case, which questions the legality of state laws that force public employees who do not want to belong to unions to pay union fees for bargaining collectively on their behalf.

"The Supreme Court case is pure and simple an attack on unions," said Fr. Clete Kiley with the Archdiocese of Chicago.

This as Sherry Hezinger vows to fight for the future.