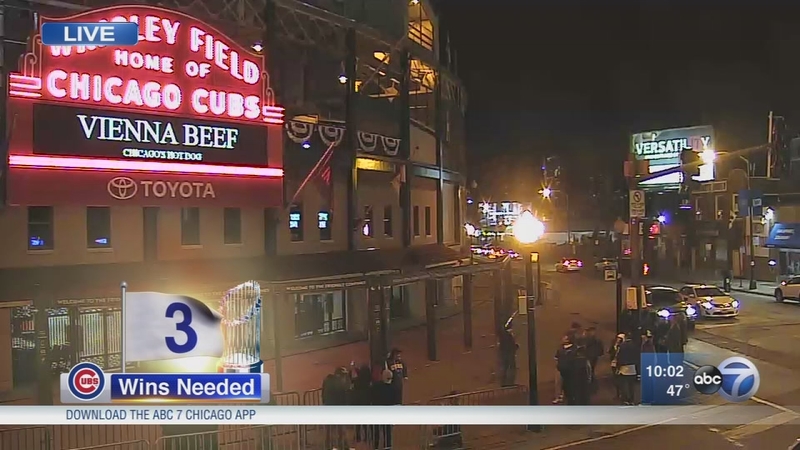 CHICAGO (WLS) -- The Chicago Cubs returned to Wrigley Field after giving the Cleveland Indians a taste of their own medicine. The team said Kyle Schwarber is not medically cleared to play in the field.

The players headed home overnight, to get some well-deserved sleep ahead of Game 3. Their pilots held a "W" flag for them on their flight. Their buses pulled up on West Waveland Avenue around 2:30 a.m. Thursday.

The National League champs are now three wins away from a World Series championship.

First pitch for Game 3 will be thrown at Wirlgey Field at 7:08 p.m. Friday. Kyle Hendricks will be the Cubs' starting pitcher. Gates will open about two hours before first pitch. Long lines are expected at security.

Kyle Schwarber's return to the roster was a borderline miracle that gave the team and - the fans - a boost in American League games, but he was not medically cleared to play in the field for the home games at Wrigley.

Schwarber would still be available to pinch hit in the games. He played as designated hitter in Cleveland, a position that does not require any defensive play.

"No one's going to be upset or anything about this decision. I'm not," Schwarber said at a Thursday afternoon press conference.

Can't wait for tomorrow! Back in Wrigley and you fans are going to bring it! We feed off you guys! Going to be electric! #LetsGo

The 23-year-old slugger returned for the World Series, making an unbelievable appearance as designated hitter for the Cubs. In Game 1, he hit a double. In Game 2, he hit two RBI singles.

MAJOR RESTRICTIONS IN AND AROUND WRIGLEYVILLE, WRIGLEY FIELD

Security will be tight around Wrigley Field during this portion of the World Series. About 1,000 police officers, state troopers and federal agents will patrol Wrigleyville and other parts of the city this weekend.

Only local traffic will be allowed from West Grace Street to West Newport Avenue and North Racine Avenue to North Wilton Avenue Friday through Sunday starting at noon Friday and lasting until 4 a.m. Monday. Residents will be required to show their IDs or proof of residence to drive in the area.

There will be security checks within two blocks of Wrigley Field. Every fan entering the stadium will go through a metal detector.

Ald. Tom Tunney (44th Ward) handed out flyers alerting residents to a much larger safety zone around Wrigley Field, which will be subject to parking restrictions and towing at the discretion of police. That safety zone extends from West Irving Park road to West Belmont Avenue and North Southport Avenue to North Halsted Street.

"Permit parking aside, just because you have your sticker does not mean you're not going to get towed," Tunney said.

Many residents were forced to park blocks from their homes, and it will also cut residents off from food delivery if they decide to hold Cubs watch parties at home.

"We actually are having people over for the next three nights, and we're going to have to go pick up supplies for the party and pick up a keg every day as well, so I'm not exactly sure how we're going to do that with no car," said Kramer LeBeau.

"I'm about to go out one more time, and that's probably going to be it because if you don't have to leave, they're saying don't," said Lindsey Lopatin.

Alcohol outside the ballpark will be confiscated and there will be random bag checks. Police also asked people to alert them to any suspicious activity.

Officials are urging fans to use public transportation. CTA will be expanding train and bus service. Make sure your Ventra card has money on it to avoid lines at pay boxes.

This is the most popular World Series ever on StubHub, with tickets for the Wrigley Games going for tens of thousands of dollars.

This is the most popular World Series ever on StubHub, with tickets for the Wrigley Games going for tens of thousands of dollars.

"It's really tough to put a price on. Wrigley has not held a World Series game since the 1940s, so there is this incredible demand in the market," said Cameron Papp, StubHub.

Lewis Eyles flew in from Liverpool, England, and hopes his wife will forgive him for what he spent on a single ticket for himself. Chris Dell lives just blocks away from Wrigley, but is waiting until Game 6 in Cleveland to see the Cubs in action with his wife.

"We decided to buy tickets out there because they're literally a third of the cost of what we were looking at here for Game 3, 4 and 5 at Wrigley Field," Dell said.

With a lifetime of dreams so close to becoming a reality, a father and son are looking forward to being part of baseball history at the ballpark.

"Max is a big baseball fan. He is 9 years old and has been to seven different World Series," Jim Clister said. The pair have tickets to Game 3.

Johnny Wallach, 7, will also be there. The 7-year-old Cubs fan had to be taken to the hospital after he was elbowed in the head by an overzealous Indians fan in the first inning of Game 1. He missed the game due to his injuries. His father, David, said the Cleveland Indians called and offered Johnny two tickets to Game 3. He made this sign to thank the team.

MEET THE MAN BEHIND THE WRIGLEY SCOREBOARD

Darryl Wilson may have the best job at Wrigley Field. He gets to sit inside the iconic scoreboard in center field, watching baseball every day. But Wilson said it's not all as it seems. When he's sitting there he has to keep track of all the other games going on around baseball. And along with a couple other guys he has to make sure to update those scores as well as keep close track of the Cubs game.

"I can read the crowd by their emotions," Wilson said.

The scoreboard has been a focal point for fans at Wrigley since 1938, and Wilson knows any mistakes will be noticed immediately.

"Yeah we try not to make any mistakes, so I'm constantly looking at this computer and as soon as I see a hit I'll yet out to the guy, 'Hey Eddie, you got a hit!'" he said.

Wilson started out as a groundskeeper and still does work on the field before climbing the latter to get into the scoreboard's cramped quarters. The narrow stairs go up to three levels. He has been running the scoreboard for 29 years and said this season has been the best; it's always more fun to win.

Wilson also gets to raise the W flag after games when the Cubs win and he's optimistically planning ahead for the weekend: he has three flags ready to go for Games 3, 4 and 5.

You'd never know there's not a game today. The Friendly Confines are crawling with fans and visitors keen to take a selfie with the famous marquee.

You can come to the ballpark and grab history, or you can mimic the stylings of the men in bronze and visit a Near North 3D print shop that will immortalize you in plastic. For $70 to $350, 3D Printing Experience will scan your body and turn the resulting image into a souvenir statuette.

The need to capture the moment is also driving people to the Wrigley Field marquee. There's no jostling, but people are clearly setting up for selfies that won't just sit on one's camera roll.

"Forty-one years I have lived with the elephant on my shoulders that the Cubs are losers, we now want to make memories with our kids," said Tom Scalzitti, who is from Chicago but now lives in Myrtle Beach, S.C.

One man was taking literally hundreds of photograms, determined to relay the magic of the moment to family in Peru.

"I love the Cubs, it's very fun but I don't understand the rules," said Rodolfo Goicochea.

Wrigleyville will be the center of the sports world for the next three days. Hundreds of thousands of fans are expected on the North Side, whether they get to go to Games 3 or 4, or plan to watch at the bars.

Employees at Wrigleyville Sports were up early Thursday morning to get their Cubs displays and merchandise organized. Before the store opened eager fans waited at the front door.

"We've been stocking up since Saturday night. It's been a nonstop rotation of merchandise," said Evette Lorenzo, who works at Wrigleyville Sports.

"I went out and bought this one this morning. 2016. I was at Game 6 for pennant win, so I had to just go out and at least celebrate that. Whatever happens in the World Series, I have no idea yet," said Zach Collinger, a Cubs fan.

"Go Cubs Go" is featured on the marquee at The Starbucks next door to Wrigley Field. Store manager Travis Hyatt said his baristas are ready to caffeinate the hundreds of thousands of fans that are expected to come out to Wrigleyville Friday.

"I think it's just about preparation. Knowing roles, routines and practices, and just knowing what to expect," Hyatt said.

A huge shipment of ice arrived at Wrigley Field Thursday. The local bars also stocked up on beer, another hot seller. Venues like The Cubby Bear will charge customers hundreds of dollars just to walk in the door. That's a turn off to some fans.

"I get that there are enterprising business owners around here, it's a little - not for me," Collinger said.

Speaking of enterprising businesses, peddlers may be able to return to the sidewalks in Wrigleyville under a revised ordinance. That decision will be voted on at an upcoming City Council meeting.

Cubs fans across the country are super excited about their favorite team competing in the World Series. 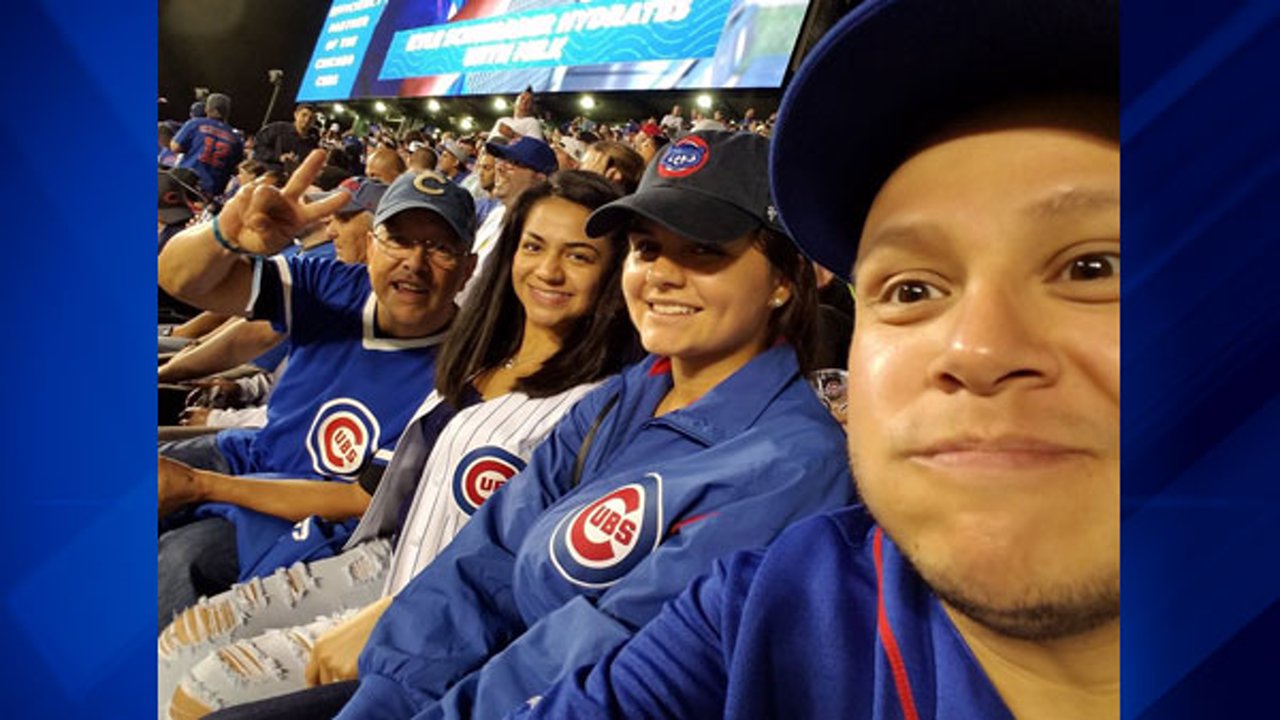 In honor of the Cubs winning Game 2 of the World Series, a member of the maintenance team at Six Flags Great America in north suburban Gurnee hoisted the "W' flag atop the theme park's Sky Trek Tower, officials said.

Cubs fan Jimmy Schultz climbed the tower, which stands at about 28 and a half stories, to place the massive flag on top. Officials said the massive "W" flag measures 38 feet by 20 feet.