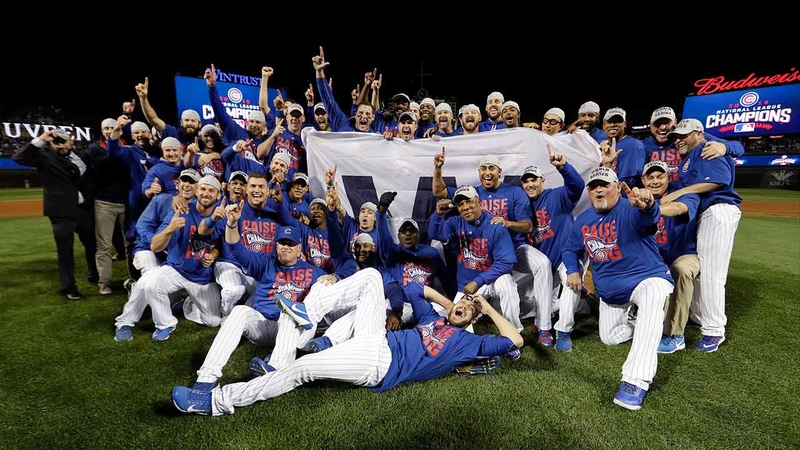 John gets fan reaction from Murphy's

CHICAGO (WLS) -- The Chicago Cubs made history Saturday night, clinching the National League Championship to pave the way to their first World Series since 1945.

The Cubs beat the Los Angeles Dodgers 5-0 in Game 6 of the National League Championship Series at Wrigley Field.

Next up? Game 1 of the World Series will be Tuesday against the Indians in Cleveland at 7:08 p.m. CDT.

All of the games will air on FOX. For more information, visit m.mlb.com/postseason-schedule.


EMOTIONAL FANS TAKE IT ALL IN

At the historic Murphy's Rooftop bar, fans lingered long after the game, called the experience of the Cubs win "emotional" and "surreal."

Many were moved to tears as they watched their team celebrate on the field.

"You go this long and have so much frustration and so much disappointment, it's such a great experience to actually get to his point," said a fan at Murphy's.

"This means everything," one fan said. "I've been waiting since the '90s to see the Cubs in the World Series, and finally it's going to happen.

"Every dream come true, everything that a sports fan wants it to be, we finally are here," said another fan at Murphy's.

Most fans admitted there are still four more wins to go to bring home the championship, and after that the true celebration can take place.

Michelle at a store in Lincoln Park where fans are getting their World Series gear.

A father and son who attended the game came to the store to purchase the Cubs World Series hats players put on at the end of the game.

"It was surreal, it was absolutely surreal, my mind flashed on a thousand different Cub's game I've been to over the years," said one fan. "It brought me to tears multiple times throughout the game."

His son said the moment could not have been more special shared with anyone else.

"It wouldn't have been as special sharing it with anyone else," the son said. "He's the biggest Cubs fan I know, he's taught me how to be a Cubs fan, I was sharing the moment with the right guy - my dad."

NICE DAY FOR A WRIGLEY WEDDING

A Cubs-loving couple hit a scheduling home run when they planned their wedding in front of Wrigley Field months ago.

A Cubs-loving couple hit a scheduling home run when they planned their wedding months ago in front of Wrigley Field for Saturday.

Sean and Laura Hileman, of Edwardsville, Ill., got married early Saturday in front of the iconic marquee. The newlyweds never imagined that their happy day could coincide with the Cubs possibly securing their first trip to the World Series in over 70 years.


FOUR-LEGGED FANS CHEER ON THE CUBS

CUBS POLKA! Felicia Carparelli, a Lakeview accordionist, performs an ode to the Cubbies!

As the game kicked off, Cubs fans were nervous to repeat history. In 2003, the Cubs were up 3-2 in the NLCS against the Florida Marlins.

The Cubs were winning Game 6 when a foul ball was caught by the now-infamous fan Steve Bartman and pretty soon after that the Cubs unraveled. There's another curse that superstitious Cubs fans are trying to reverse this season: that of the goat that was not allowed into Wrigley Field during the World Series the last time the Cubs made it that far. However, many fans say that they do not believe in curses.

WATCH: SECURITY WAS BEEFED UP AHEAD OF THE GAME
EMBED More News Videos

Security was beefed up in Chicago's Wrigleyville area ahead of Game 6.