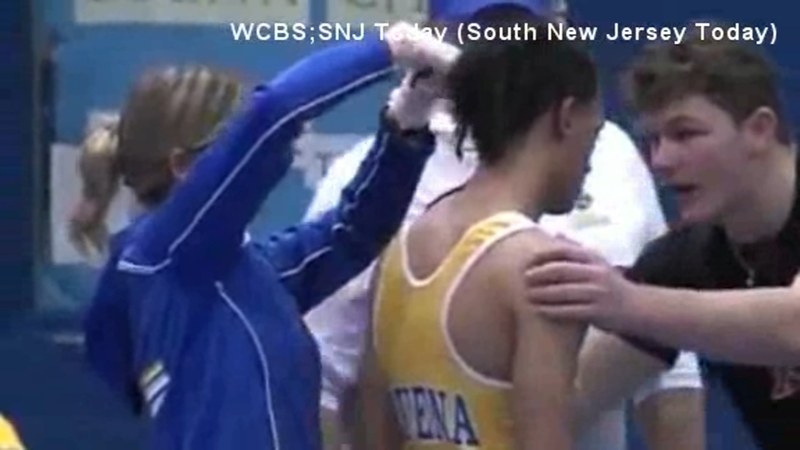 Referee benched after telling wrestler to cut dreadlocks or forfeit

BUENA, New Jersey -- New Jersey's athletic association said Saturday that a referee who told a high school wrestler to cut his dreadlocks or forfeit, which drew ire from an Olympian, the state's governor and many others, won't be assigned to any matches until the incident is reviewed.

Michael Cherenson, spokesman for the New Jersey State Interscholastic Athletic Association, said the organization had reached out to groups that assign referees "and they've all agreed" not to assign Alan Maloney to any event until further notice.

Buena Regional High School wrestler Andrew Johnson, who is black, had a cover over his hair Wednesday night during a match. But Maloney, who is white, said that wouldn't do. An SNJ Today reporter tweeted a video of Johnson getting his hair cut minutes before the match. Johnson went on to win but appeared visibly distraught.

The video was shared widely on social media, with users calling the incident "racist," ''cruel" and "humiliating."

Jordan Burroughs, a 2012 Olympic gold medalist and four-time world champion, posted and spoke on social media early Saturday about the incident, saying he had never seen anything like it in a quarter-century of wrestling.

"This is nonsense," a message on Burroughs' Twitter account said. "My opinion is that this was a combination of an abuse of power, racism, and just plain negligence." In a video posted on Instagram, he criticized parents and coaching staff at the match for not intervening, calling it "absolutely shameful."

Burroughs called Johnson "courageous" for his performance in the match despite "all of the adversity and racism that you were facing in the moment." The fellow southern New Jersey wrestler said Maloney had been the referee for some of his high school matches growing up.

Gov. Phil Murphy weighed in on the issue on Twitter, saying he was "deeply disturbed" by the story.

"No student should have to needlessly choose between his or her identity and playing sports," he said.

The state attorney general's office has confirmed an investigation by the Division on Civil Rights. The school superintendent said in a letter to the community that they support and stand by all student athletes.

Maloney came under fire in 2016 for using a racial slur against a black referee, according to the Courier Post newspaper. Maloney told the newspaper he did not remember making the comments. After the incident was reported, he agreed to participate in sensitivity training and an alcohol awareness program. A one-year suspension was overturned.