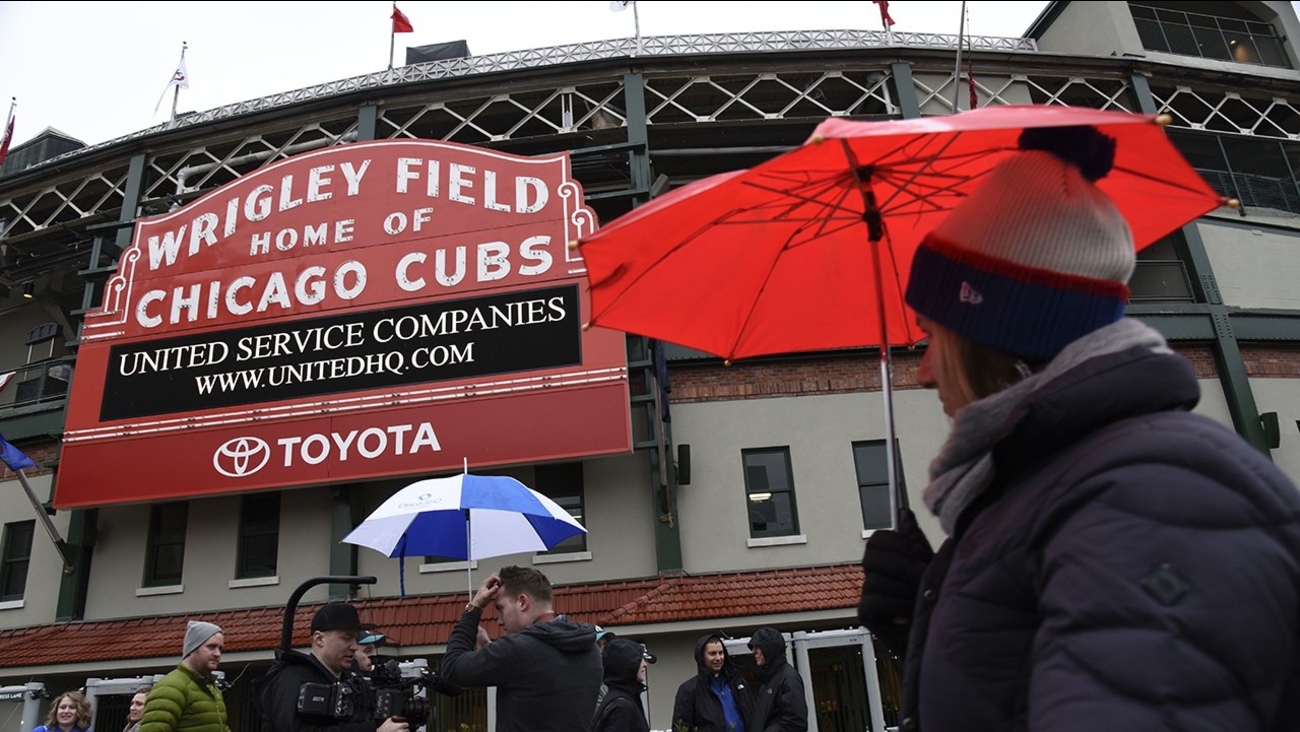 Wrigley Field after a baseball game between the Atlanta Braves and the Chicago Cubs on April 15, 2018 in Chicago. (AP Photo/Matt Marton)

CHICAGO (WLS) -- Chicago's Wrigley Field was voted the top Illinois building in an online vote for the Illinois Top 200 project.

The Illinois Top 200 project lets Illinoisans vote every two weeks on the most inspiring leaders, greatest books, top businesses and much more. By the state's 200th birthday on Dec. 3, voters will have chosen 10 favorites in 20 different categories - the Illinois Top 200.

Here are the top 10 Illinois buildings:

1. Wrigley Field - Home of the Chicago Cubs since 1916, this stadium is known for its ivy-covered outfield walls, hand-operated scoreboard and cozy neighborhood setting. With appearances in movies, plays and songs, Wrigley has become synonymous with Chicago.
2. Dana-Thomas House - Designed in 1902, this Springfield landmark is the most complete of Frank Lloyd Wright's early "Prairie" houses. Its 35 rooms and three main levels are filled with Wright-designed furniture, lights and art glass.
3. Baha'i House of Worship - The Baha'i faith has nine houses of worship around the world, and oldest of them is a stunning structure in Wilmette. It opened in 1953 after decades of planning and features a dome 138 feet high.
4. Willis Tower - The Willis Tower (originally the Sears Tower) is a 110-story skyscraper in Chicago. It was the tallest building in the world for nearly 25 years. More than one million people visit its observation deck each year.

5. Robie House - The Frederick C. Robie House, in Chicago's Hyde Park, was designed by Frank Lloyd Wright and is considered the greatest example of the "Prairie School" of architecture, with clean, horizontal lines that match the flat landscape.
6. Tribune Tower - Completed in 1925, the Tribune Tower is a landmark in downtown Chicago. The neo-Gothic building, the product of an international competition, is 462 feet high with buttresses at the top, reminiscent of European cathedrals.
7. John Hancock Center - This 100-story Chicago skyscraper (now going by the name 875 North Michigan Avenue) was the second-tallest building in the world when it opened in 1969. The distinctive X-bracing on the exterior has helped make the building an architectural icon.
8. Farnsworth House - Located along the Fox River in Plano, this steel-and-glass residence was designed by Ludwig Mies van der Rohe and was soon considered a masterpiece for its open design and the contrast of its sleek, modern lines against its natural surroundings.
9. Jarrot Mansion - This Cahokia mansion was completed around 1810, making it the oldest brick building in Illinois. The owner, Nicholas Jarrot, was a French immigrant who became a successful businessman and wanted a substantial home in the new Federal style.

10. Fort de Chartres Powder Magazine - The powder magazine is considered the oldest building in Illinois, dating back to the 1750s. It was part of a fort the French built about 45 miles south of modern St. Louis to control "the Illinois country" - the area that supplied vital food to Louisiana.
Among the buildings that did not make the top 10: Bloomington's David Davis Mansion, Carbondale's R. Buckminster Fuller Dome, Champaign's State Farm Center and Moline's Deere & Co. headquarters.

Voting in the next category, top historic sites, is underway at www.IllinoisTop200.com. Nominees include the Old State Capitol and the Lincoln Home in Springfield, Pullman National Monument in Chicago, Cahokia Mounds in Collinsville, and Route 66.

The Illinois Top 200 is a joint initiative of the Abraham Lincoln Presidential Library and Museum, The (Springfield) State Journal-Register and the Illinois Bicentennial Commission.