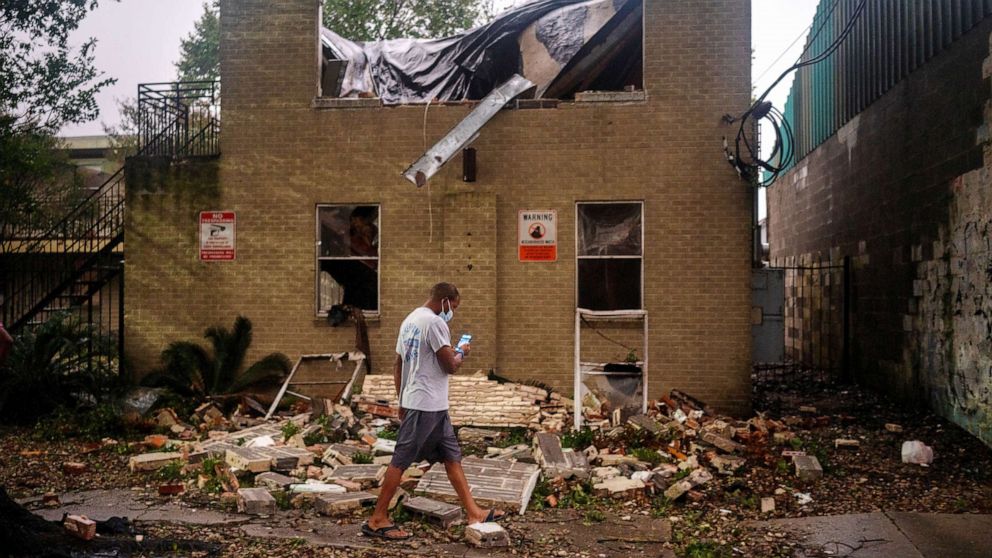 At least five people are dead after Hurricane Zeta slammed into the South, leaving a trail of destruction before turning toward the Northeast.

A 55-year-old died from electrocution in Louisiana, the governor said, and another person was killed in Biloxi, Mississippi. In Acworth, Georgia, a man died when a large oak tree was uprooted and fell through the corner of a mobile home, and in Gwinnett County, Georgia, two people were killed when a tree fell on their house, pinning them inside, authorities said.

More than 1.4 million customers still were without power as of 1 a.m. Friday across Louisiana, Mississippi, Alabama, Georgia, South Carolina and North Carolina.

Due to the power outages, 15counties in Georgia were forced to open early voting locations later in the day,Secretary of State Brad Raffensperger said Thursdaymorning.

In Douglas County, in the Atlanta metropolitan area, there wasn't power at any of the six early voting locations, and none opened. Douglas County officials said the voting sites would reopen on Friday.

Georgia requires every county to have three weeks of early voting.

"We're still assessing the situation ... but we don't see that to be an overall impact of voting at this time because we still have early voting for the balance of today and tomorrow, and obviously, the full election on Tuesday," Raffensperger said."Georgia Power understands the critical importance of elections and we're really grateful for them and really getting these polling locations up and as soon as possible."

In Louisiana, Gov. John Bel Edwards warned residents to not "go sightseeing" to inspect the damage.

"Zeta has left hazards like flooded roads, downed power lines and displaced wildlife in our communities that no one should take lightly," he tweeted Thursday.

Zeta, with winds reaching 110 mph, made landfall Wednesday as a Category 2 storm in Cocodrie, Louisiana, just south of New Orleans. Zeta is the strongest storm to hit the U.S. this late in the season since 1899, and it's the fifth to strike hard-hit Louisiana this hurricane season.

Zeta is now moving north, with gusty winds slamming the Carolinas and Virginia, and heavy rain battering much of the mid-Atlantic -- Washington, Baltimore and Philadelphia could see up to 4 inches and potential flooding.

By Thursday evening, the heaviest rain will be hitting Philadelphia, New York City and southern New England, where residents should be on the lookout for flash flooding.

Further north, in upstate New York, Massachusetts, Vermont and New Hampshire, as much as 4 inches of snow is possible by Friday morning.

A dusting of snow is possible in Connecticut and New York's Hudson Valley. New York City could even see some snowflakes mixed in with the rain.

Behind the storm, the Northeast will be hit by the coldest air of the season with wind chills possibly plunging to the 20s.