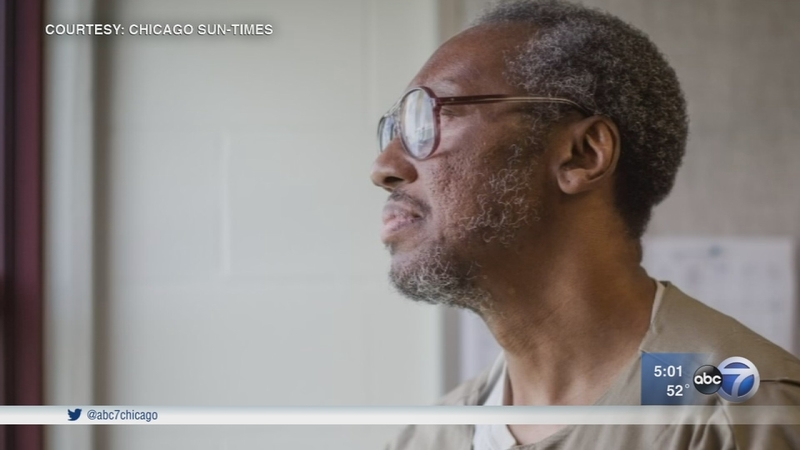 GARY, Ind. (WLS) -- A man convicted of killing a Gary police officer in 1981 has been released after spending 35 years in prison.

Zolo Azania walked out of the Miami Correctional Facility in Indiana Monday morning.

The family of the victim, Gary Police Lieutenant George Yaros, received a text message notifying them of the release. They said they are having a tough time and are just trying to cope.

In 1981, Azania was convicted of shooting and killing 57-year-old George Yaros during a robbery at the Gary National Bank.

Prosecutors said as Azania was trying to escape guns blazing, he walked over to Yaros, who had already been shot, and then fired another shot into his chest.

He was sentenced to death twice for the crime, but the Indiana Supreme Court overturned both of those sentences.

Just before a third death penalty trial was about to begin in 2007, the Yaros family agreed to let the Lake County prosecutor drop the capital punishment request in return for Azania accepting a 74-year sentence.

They hoped it would mean he'd be in prison for life, but the sentence was shortened because Azania earned credit for good behavior.

"He did everything possible the legal system could do and he won. He got out," Tim Yaros said.

Yaros' grieving son Tim and daughter-in-law LaVonne Yaros visited his grave at a Merrillville cemetery Monday, along with some current Gary police officers.

"It hurts inside because my dad was my best friend," Tim Yaros said.

"My kids, they've been without a grandfather and it hurts me the most, that part of it, because of all that he has missed," LaVonne Yaros said.

"I was just a little boy when he passed on, when he was killed. My dad and Lt. Yaros were friends and I remember attending the wake and funeral as a child," said Lt. Thomas Pawlak, Gary Police Dept.

Azania changed his name in prison from Rufus Averhart. He is now 61 and always maintained his innocence.

His attorney told the Chicago Sun-Times Azania is a changed man.

ABC7 reached out to Azania, who was released to a mentor Monday morning. Calls for the mentor and Azania's attorney were not returned.