AP
KANSAS CITY, Mo. -- Vice President Mike Pence visited the Midwest on Tuesday to view flooding caused by heavy rains and snowmelt that damaged hundreds of homes and inundated tens of thousands of acres with water.

Flooding is expected throughout the week in several states as high water levels flow down the Missouri River. Swollen rivers have already breached more than a dozen levees in Nebraska, Iowa and Missouri, according to the U.S. Army Corps of Engineers.

The flooding, which started after a massive late-winter storm hit the Midwest last week, has been blamed for at least three deaths.

Pence arrived late Tuesday afternoon in Omaha, Nebraska, where the president of the Nebraska Farm Bureau estimates farm and ranch losses could reach $1 billion. Steve Nelson estimates $400 million in crop losses because of crops that will be planted late, if at all. He also estimates up to $500 million in livestock losses from the floods.

The Nebraska city of Fremont was walled off by flooding, but local residents got a lift from private pilots offering free flights to shuttle people to and from their hometown. Gov. Pete Ricketts said in a news release Tuesday that there have been disasters with greater loss of life but "I don't think there's ever been a disaster this widespread in Nebraska." He said 65 of the state's 93 counties are under emergency declarations.

In Missouri, water was just shy of getting into Ryonee McCann's home along a recreational lake in Holt County, where about 40,000 acres (16,188 hectares) and hundreds of homes have been flooded. She said her home sits on an 8-foot (2.5-meter) foundation that she last saw Monday while flying over the area in a helicopter.

Video from the trip shows acre after acre of inundated land.

"We have no control over it," the 38-year-old said. "We just have to wait for the water to recede. It's upsetting because everything you have worked for is there."

The Missouri River was forecast to crest Thursday morning at 11.6 feet above flood stage in St. Joseph, Missouri, the third highest on record. More than 100 roads are closed in the state, including a growing section of Interstate 29. The State Highway Patrol is watching from the air and has water patrol officers on standby to help.

There are widespread evacuations in two counties, including Holt County.

"This isn't new to them," Highway Patrol Sgt. Jake Angle said. "But it's no less devastating."

In nearby Atchison County, Missouri, floodwaters knocked out a larger section of an already busted levee overnight, making the village of Watson unreachable, said Mark Manchester, the county's deputy director of emergency management/911.

Manchester said officials believe everyone got out before thousands of more acres were flooded.

But he said so many roads are now closed that some residents must travel more than 100 miles (160 kilometers) out of their way to get to their jobs at the Cooper Nuclear Station in Nebraska.

"It's a lot harder for people to get around," Manchester said.

River flooding has also surrounded a northern Illinois neighborhood with water, prompting residents to escape in boats. People living in the Illinois village of Roscoe say children have walked through high floodwaters or kayaked to catch school buses amid flooding along the Rock River.

Flooding along rivers in western Michigan also has damaged dozens of homes and businesses.

President Donald Trump tweeted Monday that he was staying in close contact with Iowa Gov. Kim Reynolds and South Dakota Gov. Kristi Noem about the flooding in those states. Reynolds says she plans to press for a federal disaster declaration. Forty-one of the state's 99 counties are now included in her state disaster declaration.
Report a correction or typo
Related topics:
missourinebraskaiowaillinoisfloodingmike pencestormweatheru.s. & world
Copyright © 2020 by The Associated Press. All Rights Reserved.
RELATED 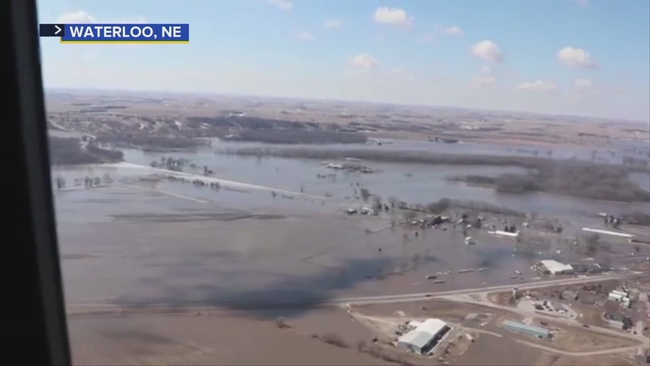 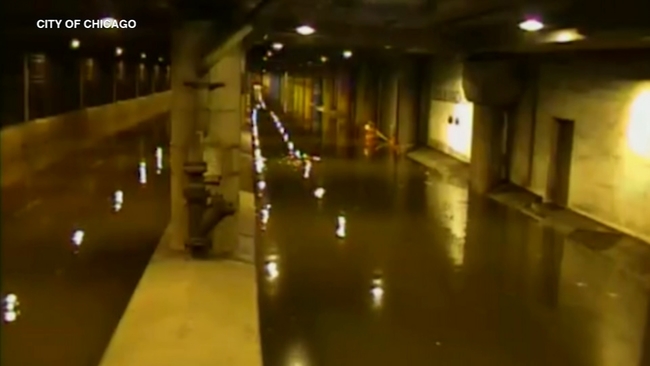 New video shows major flooding on Lower Wacker in May 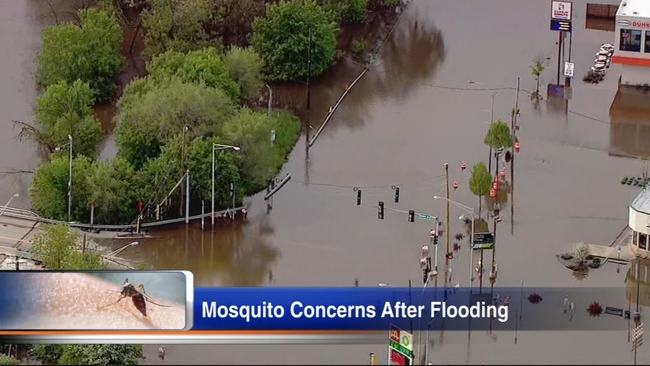