Punishment for concealing a killing in Chicago? 150 days

WLS
By By: Chuck Goudie, Ross Weidner and Barb Markoff
A Chicago man is being released from Cook County Jail after serving less than six months behind bars even though he admitted dumping the stabbed body of a disabled man in a West Side alley.

Arthur Hilliard, 51, pleaded guilty on Tuesday to concealment of a homicide victim. 52 year old Andra Williams was found dead in a shopping cart last September. Hilliard was seen on security video wheeling the cart into the alley.

Late Tuesday, officials at the Cook County jail told the I-Team that Hilliard has been released from their custody.

William's relatives say that Hilliard didn't just cover-up the killing; they say he actually did the killing and should not be allowed to go free after merely 150 days in jail.

In Tuesday's plea deal with Cook County prosecutors, accepted by Judge Nicholas Ford, Hilliard agreed to a 300-day sentence for concealment, a Class 3 felony. Under sentencing rules he only had to serve half of the total, and therefore was eligible to go free immediately.

Chicago police and Cook County prosecutors continue to investigate the Williams murder and are said to be awaiting DNA evidence and other forensic test results.

Judge Ford also sentenced Hilliard to two years' probation, during which he will be required to wear an electronic tracker bracelet and abide by a curfew. He must also fulfill 130 hours of community service.

Williams was in a wheelchair during the stabbing attack. His corpse, with multiple knife wounds to the face, head and neck, was found dumped in the shopping cart in an alley behind the building where he rented a room. Prosecutors say Hilliard was that building's manager.

Cook County prosecutors say they had asked for the maximum prison sentence of 5 years.

The 150 days that Hilliard will end up serving, and the lack of a murder charge thus far in the case, angered and aggravated relatives of the

"Why would anyone conceal a homicide that someone else had performed?" the victim's mother Erma Williams asked Judge Ford.

During the change-of-plea hearing Ford expressed his sorrow about William's death and told family members "My difficulty is that I can only sentence this man based on what he is charged with in my courtroom. It's not a murder case" reminded Judge Ford. "What I'm doing today doesn't mean it will never be a murder case," he said.

William's mother told the I-Team that "I know he murdered my son. I don't have no doubt to the core of my bone. He murdered Andra."

Also in court on Tuesday were family members of another murder victim, Diamond Turner. The 21 year old Chicago woman was killed with a sledgehammer blow to the head. Like Williams, Turner's body was found in an alley. She was stuffed in a South Side trash can and garbage collectors found her on March 3, 2017. The I-Team has been investigating her case for more than a year.

Turner's relatives believe that Hilliard is considered the prime suspect in that killing, but he has not been charged.

The Williams and Turner families have merged in the misery of slow-moving Chicago justice. Both families have demanded police step up the investigation of Diamond Turner's death and that of Andra Williams.

Chicago police have continued to say that the Turner case remains "an open and active homicide investigation."

"It's crazy that they're letting this man walk..." said Diamond Turner's aunt, Latonya. She said that family members have been told police are waiting for DNA results from the Turner killing that occurred nearly two years ago.
Report a correction or typo
Related topics:
chicagocook county jaili team
Copyright © 2021 WLS-TV. All Rights Reserved.
RELATED 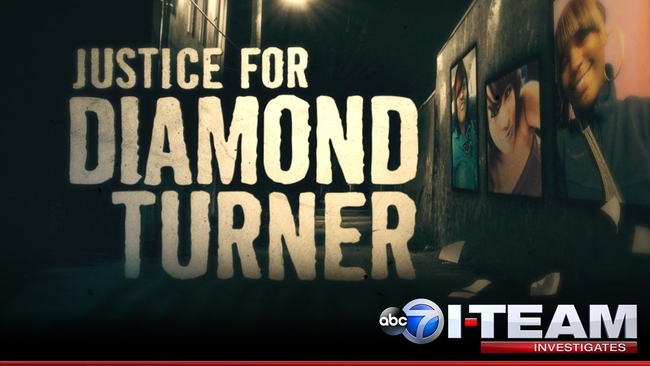