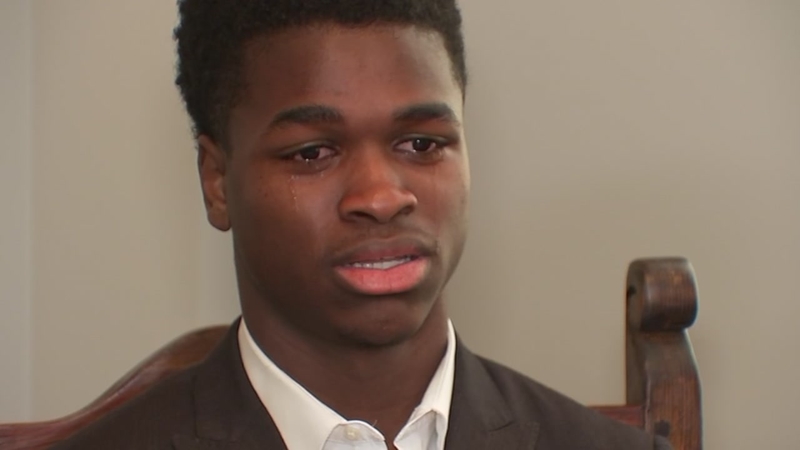 HOUSTON, Texas -- The Armstrongs were a picture-perfect, all-American, faith-filled family.

Dawn and Antonio, both 42, were the kind of couple other couples envied. In July 2016, they were raising three bright, outgoing, accomplished children. They were savvy entrepreneurs: owners of a small chain of local gyms.

Antonio was a motivational speaker, respected from his days on the football field. He played for the Miami Dolphins in the 1990s and before that, for Texas A&M.

Weekends were spent at Antonio's mother's church, where he was an assistant pastor. Dawn was often volunteering or driving her children to practice. She was proud of her 18-year marriage and put her family first.

Dawn and Antonio were shot in the head while they slept in their townhome on Palmetto Street in southwest Houston. Hours later, their son A.J. was charged with two counts of capital murder.

For two years, the case has dragged on in court. A.J., now 18, has appeared in front of a judge well over a dozen times. He's never spoken publicly about that night. Until now.

"It's.... it's been really hard," A.J. said, breaking down in tears. "It's not even the fact of just dealing with not having my parents anymore. It's the fact that I'm being accused of something of this magnitude."

The teen sat at a conference table in his lawyer's office during our interview. He wore a black suit with a crisp white collared shirt, surrounded by his two grandmothers, grandfather and two attorneys.

A.J.'s attorneys said he can't discuss the facts of the case. But, the teen maintains what he always has: he didn't kill his parents, an intruder did.

"Like, I'm innocent. There was somebody else in that house that night and to know that this is something I'm being accused of, just makes everything so much worse," A.J. said.

According to the police report, there were no signs of a break-in. Investigators found holes consistent with a .22 caliber bullet hole on the floor of A.J.'s room and in a pillow and comforter in his closet.

Police found the gun on the kitchen counter next to a note that read, "I HAVE BEEN WATCHING FOR A LONG TIME. GET ME." A.J.'s fingerprints and DNA were not found on that gun.

A.J. spent eight months in juvenile jail: junior year of high school in a cell. No football games, no prom, no graduation.

Timeline of events in the AJ Armstrong murder case

"Jail was very, very hard," A.J. said. "I mean, many sleepless nights just not being able to be around my family. Only having 10-minute phone calls a week. Like, it was just very hard. And hearing my little sister on the phone, it was just tough to deal with because I wanted to be there for everyone. I wanted to try and help and just being locked away...it just made it really hard."

In March 2017, A.J. bonded out of jail after being certified to stand trial as an adult.

More than a year later, there was a twist in the case: the defense filed a motion to drop the murder charges. A.J.'s attorneys say prosecutors kept evidence from them.

"They [prosecutors] don't want the public to know what's going on in this case," said Rick DeToto, AJ's attorney.

Enter: Maxine Adams. She's a close friend of Dawn and Antonio. Six months after the murders, Adams spoke to police on record, saying her husband and Antonio were involved in a prostitution ring and Antonio had received death threats.

A.J.'s attorneys knew Adams talked to investigators in December 2016, but say they were told she wasn't credible.

Eyewitness News questioned the defense: why not send a public investigator to speak to Adams when they first learned of her claims?

"We could have. That's probably a mistake on our part," DeToto said.

Prosecutors declined to be interviewed for this story but sent Eyewitness News this statement:

"Prosecutors gave the woman's name in writing to defense lawyers almost two years ago. The defense could have spoken with her at that time, but chose not to do so. She is not a stranger, but the wife of a woman who said her husband was 'like a brother' to Antonio Sr.," said Dane Schiller, Director of Communications for the Harris County District Attorney's Office.

Eighteen months later, the defense was given Adams' taped conversation with police in which she suspects someone involved in the prostitution ring was out to get Antonio.

"It's 13 minutes of full details, names, phone numbers, people involved, how it worked," DeToto said. "We could have looked into this when it was fresh. When the phone numbers were fresh. When peoples' memories are fresh."

"The woman said that my son was receiving threatening phone calls. He's dead. You mean to tell me that wasn't enough for you to start investigating?" asked Kay Winston, Antonio's mother.

Winston says it wasn't easy for the family to make public Adams' claims that Antonio was allegedly involved in a prostitution ring.

At the core of this case, looking past the claims, the accusations, the evidence and opinions, there are three heartbroken parents.

Keith Whitely, Dawn's father, broke down when we asked him to describe his daughter and son-in-law.

"They were amazing. They were two amazing people," Whitely said. "She was amazing. She was one-of-a-kind. We did everything, spent almost every weekend together. I went to the children's events, sporting events, every weekend we would be together and we would just have a wonderful time. I miss her so much."

"I loved my daughter. I loved my son-in-law," said Ramona Whitely, Dawn's mother. "People would look at them and say they were almost a perfect couple."

The Whitelys and Winston are navigating the deep waters of grief while fully supporting their grandson. They've always believed A.J. is innocent.

A.J. was most recently in court nine days ago. The judge did not drop the murder charges. His attorneys are considering their next move.

The trial is set to start on March 29.

"The fact remains that Dawn and Antonio Armstrong Sr. were each shot in the head in their own bedroom, with their own gun, in their house that has was secured by a fully functional burglar alarm that had to be disarmed by the defendant before police could enter the house," Schiller said in the statement to Eyewitness News. "Antonio Jr. remains charged with capital murder for the brutal slaying of his parents, who were killed as they slept. Prosecutors look forward to presenting all of the evidence to a judge and jury at trial."

While A.J. waits, he leans on faith. On Sundays, you'll find him in church, with his grandmother at her Sharpstown-area church. Winston preaches from the stage as A.J. sings and taps the tambourine.

"No matter how hard things get, I know if I just get into my word, if I pray, I know everything will turn out okay. I know I'll feel better," A.J. said. "My dad was my best friend. My mom was the best mom you could have and there's not a day that goes by that I don't think about the things that they did for me."

READ THE FULL CHARGING DOCUMENT FILED AGAINST AJ ARMSTRONG:
WARNING: SOME DETAILS MAY BE DISTURBING