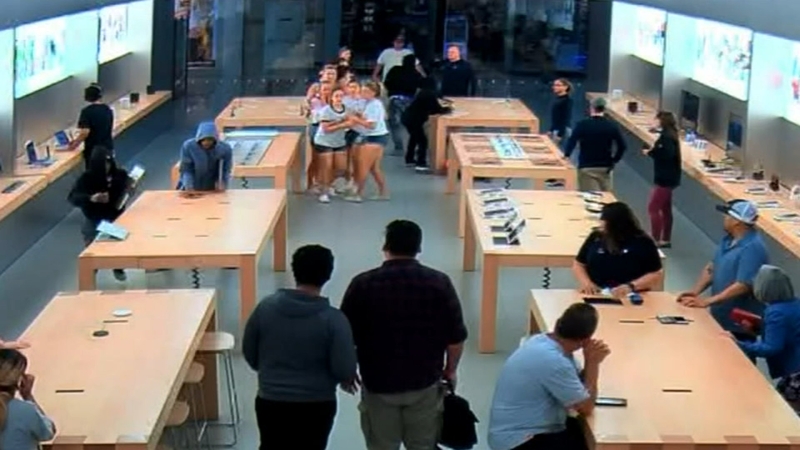 FRESNO, Calif. -- Crystal clear surveillance video shows how a group of young men made off with Apple products worth thousands.

Lt. Mark Hudson of the Fresno Police Department says the group took, "Various iPhones, the iPhone 6, iPhone 7 and 8, and even the new iPhone X was taken in this grand theft."

Just as quickly as they arrived, the young men in hoodies wasted no time, ripping out the tethered electronics from display tables throughout the store as customers and Apple Store employees looked on.

One of the thieves, with an arm full of laptops, scurried past a group of frightened teenage girls.

"One customer stood by the door to prevent them from leaving but was knocked out of the way," said Lt. Hudson. "Right now we are looking for four, or five, we believe there was a getaway driver, black males anywhere from 16 to 18 years old."

According to police, the suspects never displayed any weapons.

Investigators are reviewing the surveillance footage from the inside the store to see who the young men are, and if the crime might be connected to a similar robbery in Downtown San Luis Obispo last month.