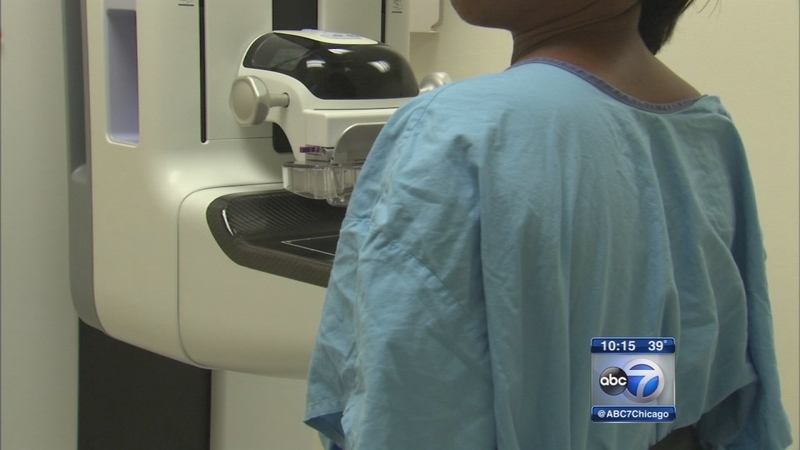 CHICAGO (WLS) -- If you're a woman and live in Illinois, information may be missing on your mammogram results, and it could put your health at risk.

A mammogram is among the most important health tests a woman can have. But the I-Team has learned that under Illinois law, one of the most common risk factors for breast cancer doesn't even have to be revealed in those results that women receive.

"This little mark here shows where my tumor is," said Mindy Chychlyk, a breast cancer patient.

A little more than a year ago during a self-exam, Chychlyk discovered a lump.

"I had a clear mammogram and a month later I had breast cancer. It was at that point I learned I had dense breasts," Chychlyk said.

Here is the standard "all clear" letter she got in the mail, and this is the report from the radiologist, noting her breast tissue is dense, which "could obscure detection of small masses" - information she says she never got. Forty percent of women who have a mammogram have what is known as dense breast tissue, but in Illinois, they don't have to be told and not all doctors discuss it.

If she lived in one of 19 states, that letter would have included her breast density. Those states now have reporting laws, but Illinois does not. Dense breast tissue can potentially mask tiny tumors on screening mammograms. Advocates say women need to know their density so they can ask if additional screening is necessary.

"Do you realize, prescription drugs, warning. Kitty litter, warnings. We can't give a woman warning on a mammogram result?" said Nancy Capello, Ph.D., founder of Areyoudense.org.

After Capello learned she had advanced cancer that mammograms missed, she began a grassroots effort on density reporting that resulted in the first law passed in Connecticut.

"The truth of the matter is I wish we could use voluntary measures to get this information to women, but it doesn't work," Capello said.

Attempts to pass a true notification law in Illinois have failed. What exists, the I-Team discovered, is a public act directing the state - if the money exists- to print up and distribute breast cancer brochures (Brochures: 1,2) including information on breast density.

That hasn't happened either. The Illinois Department of Public Health tells us there is no funding.

"The bill I passed this year is bringing more awareness to dense breasts, there's still much more we can do," said State Rep. Michael McAuliffe (R-Chicago).

Medical lobbyists, including the Illinois State Medical Society, are fighting a mandate, arguing it would legislate the practice of medicine.

Some physicians also point out that breast density is not an exact science, and there's no clear evidence which additional screenings are best. They say dumping this on women without a discussion would cause panic, false alarms, unnecessary screening tests and potentially harmful biopsies.They want density interpreted by a woman's own doctor, with decisions based on her personal medical history.

"Putting it in a form that comes in the mail is not giving enough information for what that particular woman needs," said Dr. Maura Quinlan, Illinois State Medical Society. "We have to try not to be swayed by emotional or case reports and really go with the science."

University of Chicago Medicine and some other facilities are not waiting for a law.

"We have started sending out letters that say breast density," said Dr. Kirti Kulkarni, University of Chicago Medicine. "We want the patient to know about this so we can start a conversation."

U of C recently invested in whole breast ultrasound technology as an adjunct to mammograms. Research suggests ultrasound can reveal tumors the x-rays miss. But, it's not foolproof.

Chychlyk says she just wishes someone had given her all of the information early enough.

"Eleven years of mammograms and never was I told I had dense breasts," said Chychlyk. "I think the mandate is critical to make sure the conversations happen."

Chychlyk has finished her cancer treatments and is doing well. What confounds advocates of density reporting is that Illinois is considered to have one of the best laws mandating insurance companies to cover ultrasound screenings for appropriate cases.

Right now, efforts are underway to pass a national standard to require a woman's density information be part of her mammography report.