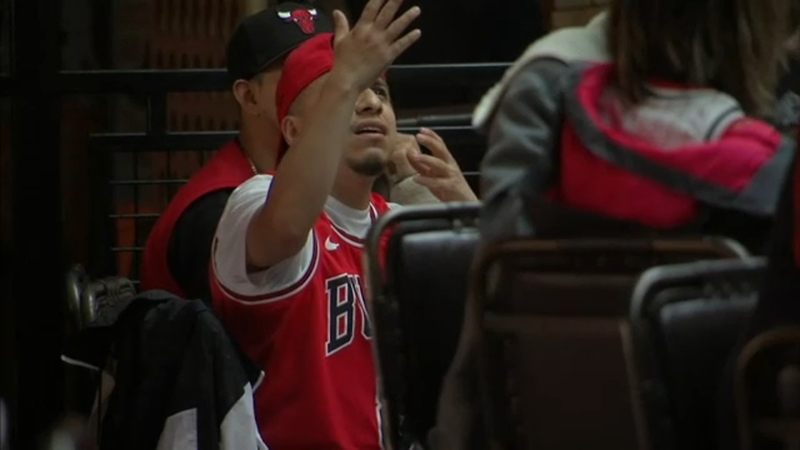 CHICAGO (WLS) -- Chicago Bulls fans started Sunday's game excited, hoping for a win after Friday's loss, but it only ended with yet another loss for the team.

A sense of optimism kicking off the first quarter of Game 4 of the Bulls versus the Milwaukee Bucks.

"We're playing in the home court right now, so we're in Chicago, so hopefully we can get that win tonight," Bulls fan Ivan Martinez said as the game was still underway.

However, in the midst of this Bulls excitement at "Recess in City Hall" in the West Loop, came a touch of Bucks green and competitive sarcasm.

"I like being in enemy territory, you know," teased Bucks fan Johnny Zizzo. "At least you'll have one more game that you can look forward."

Local businesses are also glad to see fans turn out to watch the hometown team.

"It's been a long time since we've seen this, and we're really happy to have a good crowd here and a lot of positive energy," said Alec Pignotti, beverage manager at Recess in City Hall

By halftime, though, that positivity turned into frustration.

Fans at the United Center share those same sentiments, while others left the stadium still holding on that optimism.

"Started out all right. By at the end, it kind of just cooled out and we couldn't make a shot," said Bulls fan Jasen Bryan.

"We took an L today. We took an L the other day. But, we just got to go back to Milwaukee and take care of business. You seen what happened in Milwaukee," said Bulls fan El Saddyk.

The Bulls have only won Game 2 in the seven game series. The team is hoping to repeat that again for Game 5 on Wednesday.

Grayson Allen set playoff career highs with 27 points and six 3-pointers, Giannis Antetokounmpo had 32 points and 17 rebounds and the Milwaukee Bucks beat the Chicago Bulls 119-95 on Sunday to take a 3-1 lead in their first-round series.

Jrue Holiday scored 26, and the Bucks made it look easy again after beating the Bulls by 30 and handing them the most lopsided home playoff loss in franchise history. The defending NBA champions led by 22 early in the third quarter and steadied themselves after a push by Chicago. They'll try to wrap up the series in Milwaukee on Wednesday.

Allen delivered another huge effort off the bench, surpassing his previous postseason scoring high of 22 points in Game 3. He made 10 of 12 shots and nailed 6 of 7 3s, with Chicago fans booing just about every time he touched the ball.

Holiday made five 3s. Bobby Portis added 14 points and 10 rebounds in his second straight start with Khris Middleton sidelined because of a sprained left knee, and the Bucks beat the Bulls for the 19th time in 21 games.

It was 54-39 with just over two minutes left after he and Holiday nailed back-to-back 3s. Chicago's Patrick Williams dunked, and Allen missed from up top after making his first four 3s. But he banked in a floater in the final minute to make it a 15-point game.

Portis nailed a 3 and Holiday buried a 30-footer, bumping it to 63-41 in the opening minute of the third. The lead was down to 68-60 midway through the quarter after a 17-3 run by Chicago.

But the Bucks answered by scoring 11 straight. Antetokounmpo had six of those points, including a dunk to make it 79-60, and fed Allen for a 3 after blocking LaVine during that stretch.

Bucks: Portis and LaVine had to be separated in the closing minutes of the game after they got tangled and had a heated exchange near the Bulls' basketball. Portis wore goggles again to protect his right eye. Portis suffered an abrasion in Game 2 when he was hit by Chicago's Tristan Thompson as they went for a rebound. ... G George Hill (abdominal strain) missed his fifth game in a row. And coach Mike Budenholzer doesn't anticipate him returning on Wednesday. "I don't think I'd put him in the day-to-day category," he said. "I think he's gonna need a little more time. Hopefully, it's shorter rather than longer." ... G Luca Vildoza was unavailable because of a non-COVID illness. The 26-year-old Argentinean played eight minutes in Game 3 in his NBA debut, after signing with the Bucks on April 6.

Bulls: G Alex Caruso left the game with a facial injury. ... Chicago has lost six straight home playoff games since beating Cleveland in Game 3 of the 2015 Eastern Conference semifinals. Chicago dropped that series in six games. ... Assistant coach Maurice Cheeks was back after missing Game 3 with a non-COVID-19 illness.