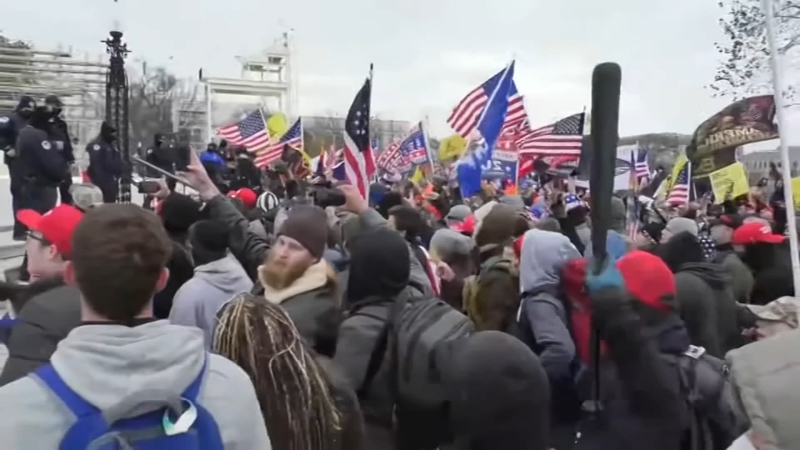 NAPERVILLE, Ill. (WLS) -- In Chicago and the suburbs, concerns about democracy prompted rallies and vigils to mark the one year anniversary of the violent insurrection at the U.S. Capitol.

On a frigid night, dozens of people gathered for a candlelit vigil in Naperville for a somber reflection on the events of a year ago. The storming of the U.S. Capitol in an effort to prevent the certification of the presidential election stunned the nation

The vigil, coordinated by the League of Women Voters of Naperville and the DuPage NAACP among others, was a chance to promote laws to protect voting rights.

"I certainly hope that January six was a wake up call to voters in America that democracy is not a given. We need to work to promote democracy," said Becky Simon, President League of Women Voters of Naperville.

For educators like Chris Wolak, who teaches American government classes at Waubansie Valley High School in Aurora, the attack on the Capitol provoked a lot of questions from students.

"I think most were just kind of like questioning what the heck is going on, and trying to make sense of it, like, like we all are," Wolak said.

But it also provided a chance to talk about the importance of voting. Two hundred students got registered this past year.

"We tried to build a, a civics mindset for our students that democracy is a verb, they have to be active and actively engaged," Wolak said.

But while the riot motivated some students to get politically engaged, for others the partisan rhetoric that followed has had the opposite effect. And it may impact voter turnout in the midterm elections.

"I definitely think that it will be significant that both sides will be using it," said David Goldberg, College of DuPage Political Science professor.

Goldberg hopes that on this anniversary, people will recognize what happened with the proper perspective.

"There was an attack on our Constitution. It was an attack on the rule of law and democracy and everything that we purport to cherish and hold dear. And people should stop and think about that and not do so through a red or blue lens," Goldenberg said.