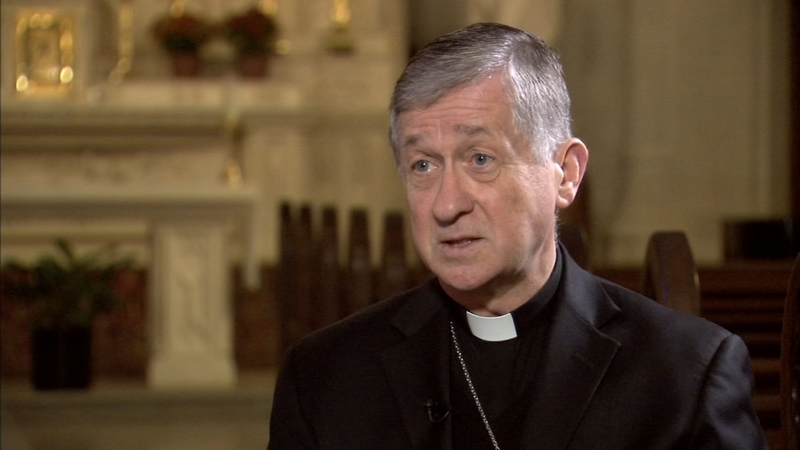 CHICAGO (WLS) -- Cardinal Blase Cupich weighed in on the Vatican telling American Catholic leaders to hold off on new policies to discipline bishops accused of misconduct.

It comes as divisions among some Catholic leaders are being aired openly, with one archbishop even calling on Pope Francis to resign. Chicago's Cardinal spoke one-on-one about the latest trials for the American Catholic Church, though he said he doesn't foresee the threat of a schism.

"I would also say, having been a bishop for 20 years, I have had the experience of bishops vehemently disagreeing with each other on various points... but we should look for a way in which we preserve unity among ourselves, among the differences that are there," he explained.

And that's precisely why Pope Francis has called all U.S. Catholic bishops to come together at the seminary in north suburban Mundelein after the first of the year for a spiritual retreat.

Cardinal Cupich will host, hoping to re-focus on what the Pope has begun.

"We need to move forward in a way that cultivates an adult spirituality in the lives of people and gets laypeople involved in the decisions that are part of the church - and I think that some people have trouble with that," Cupich said.

Those decisions include the Church's response to sex abuse and the key part of what U.S. Catholic bishops wrestled with at their meeting last week in Baltimore: How to discipline their own? Cardinal Cupich's proposal includes laypeople on review panels, involved in any investigation of a bishop.

"My hope would be that we could expand it in such a way that it would be obligatory for everyone - and have lay involvement," he said.

The Cardinal says the Chicago Archdiocese has cooperated with an investigation by Illinois Attorney General Lisa Madigan in providing records of clergy accused of abuse in the past. So, the Cardinal has an answer for Chicago Catholics questioning trust in church leaders.

"We are transparent, we are accountable. We have lay involvement. We cooperate with civil authorities. So the situation, here in the Archdiocese, is something that people can be confident in that children are being protected," he said.

Even with that statement of confidence, the Archdiocese has recently hired an outside consultant to review all its policies on abuse prevention and reporting.