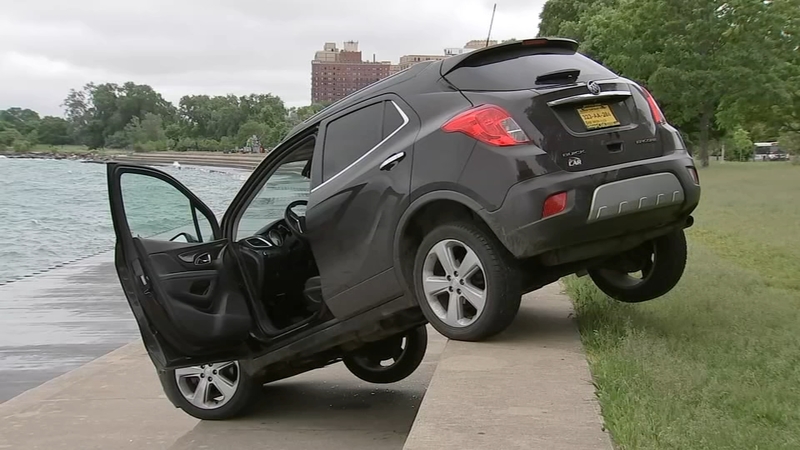 The SUV was left hanging on the edge of the break wall near 51st Street after police said a woman was carjacked near 35th and State, the area between Gauranteed Rate Field and Chicago Police Dept. headquarters.

"I just don't feel safe around this area because I just hear things that happen and we always get alerts on our IIT email about carjacks and stuff happening," IIT student Ayesha Qamer said.

According to police, the 40-year-old woman in that car complied with a carjacker's demands - at gunpoint - to get out of her car around 8:40 a.m. The suspect then drove north, eventually jumping the park pathway.

"It is something that is part of living in here day-to-day," said Elliot Delahaye.

Delahaye, who walks in the area to clear his mind, just completed his first year as a graduate student at the University of Chicago.

His friend, U of C graduate Dennis Shaoxiong Zheng, was gunned down outside their nearby Hyde Park apartment building last November when someone tried to steal his cellphone.

"He was the first guy I met in America," Delahaye said, "so these are things I would never consider could happen to me."

Police said that after the suspect ditched the car, the offender assaulted a 26-year-old man in the area and then tried to carjack another victim. It was at that point, responding officers arrested the suspect.

So far this year, CPD data shows there have been 790 carjackings across the city, up 4% from 758 for the same period last year. During the same period in 2020 there were 484, and in 2019 just 250 - meaning carjackings have more than tripled in three years.

"We live in a socio-economic climate where this is something people feel that this is the best option for them, to rob my friend, to carjack someone and drive it into the lake," Delahaye said. "So I have sympathy for both sides."