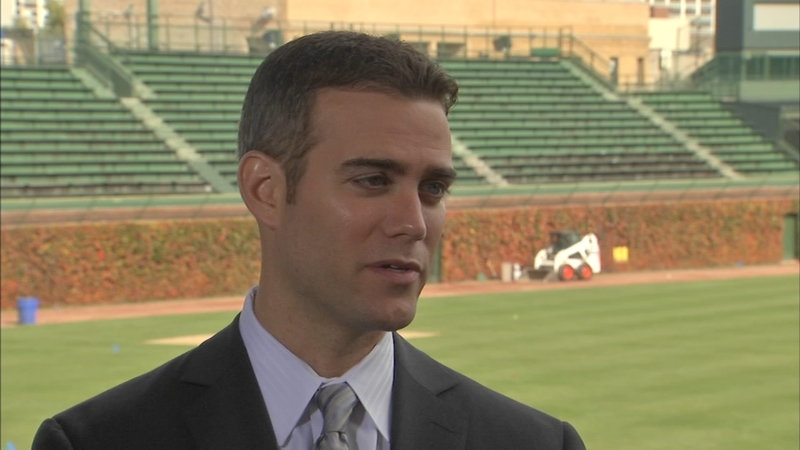 CHICAGO (WLS) -- Theo Epstein is stepping down from his role with the Chicago Cubs as president of baseball operations, the team announced Tuesday.

Epstein's final day with the Cubs will be Friday. He has served in his role with the Cubs for nine seasons, helping assemble the team that won the 2016 World Series, ending the team's 108-year title drought.

Cubs fans reflected on the resignation of the former team president.

"It's sad but just like everything else in the pandemic, it will bring about all new," said Leila Gorstein, a jogger.

"He's done a lot for this community and this area and for the Cubs, so I think now someone can pick it up for him and make it even better," another jogger said.

"For the rest of my life, I will cherish having been part of the great Chicago Cubs organization during this historic period," said Epstein. "All of the things that have made this experience so special - the fans, the players, the managers and coaches, ownership, my front office colleagues, the uniqueness of the Wrigley experience, the history - make it so tough to leave the Cubs. But I believe this is the right decision for me even if it's a difficult one. And now is the right time rather than a year from now. The organization faces a number of decisions this winter that carry long-term consequences; those types of decisions are best made by someone who will be here for a long period rather than just one more year. Jed has earned this opportunity and is absolutely the right person to take over this baseball operation at such an important time. "I am grateful to everyone with the Cubs: to the Ricketts family for this opportunity as well as for their loyalty; to the fans for their support and the depth of their emotional connection with the team; and to the players, coaches, staff and my front office colleagues for their friendship, excellence and dedication to helping us accomplish our initial goals of regular October baseball and a World Championship."

The Cubs won 505 regular season games under Epstein's tenure and made the playoffs in five of the last six seasons.

Success from Epstein's tenure and ability to change Cubs culture is reflected in the Wrigleyville confines that was transformed into an entertainment hub.
"Really rebuilt the team from scratch and really changed the whole legacy of the Cubs from lovable losers to a team people expect to win," said Paul Sullivan, Chicago Tribune baseball writer.

Sullivan believes Epstein's World Series-winning team was supposed to win more but was a hard-nosed executive who may have been too loyal.

"Some of these players needed to go. They couldn't hit. This team hasn't hit in a few years and he held on to them for too long," Sullivan said.

"I have no bad thoughts about Theo whatsoever. What he did with Chicago and with Boston and whatever he's going to do in the future is great, said Jaco Chandra, Cubs fan.

Before he joined the Cubs, Epstein served as general manager of the Boston Red Sox, where he won two World Series championships.

"Theo and I have been communicating about this possible move for a couple of years, and we have been working together toward a transition that makes sense for the Cubs and for him," said Cubs Chairman Tom Ricketts. "The timing is right for a number of reasons, and most importantly we are both thrilled that Jed is the person succeeding Theo. We have had our most successful period in over a century under Theo's leadership, and we are grateful for everything he has given to this organization and this city. Jed has been a big part of that success, too, and offers a combination of continuity and a fresh perspective that will serve us well as we look forward to another period of sustained success."