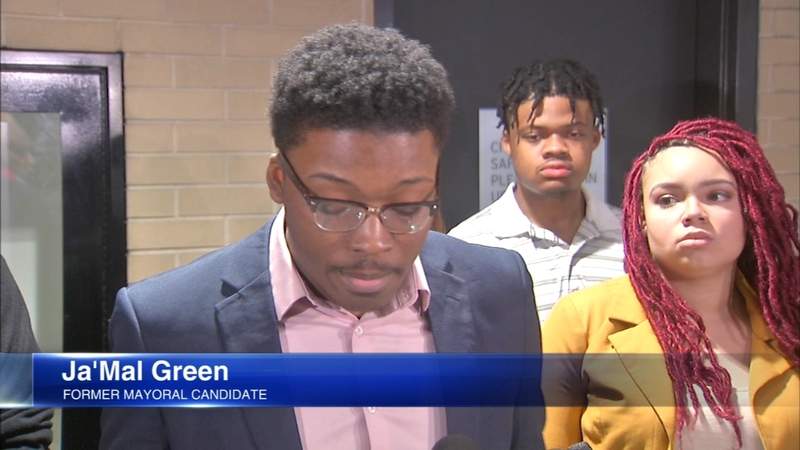 CHICAGO (WLS) -- Community activist and candidate for mayor Ja'Mal Green announced that he is withdrawing from the race Monday.

Green, 22, announced in a press conference held Monday morning that he is removing himself completely from the race and will not mount a write-in campaign.

The decision is due to a lack of funding and resources, Green said.

"Over the past few weeks, we have been dragged through a challenge process that I wouldn't wish on any campaign. After collecting over the required number of signatures, the board of elections lost our petition sheets and claimed they accidentally gave me someone else's," Green said in a statement released Monday. "The board of elections hires Madigan's helpers and many who are unequipped to make decisions that affect major races. They said my own mother signature was not her signature on my petition."

"My desire to be a voice for the people was no match for Dr. Wilson's dirty dollars," Green said in the statement.

Green first announced his candidacy April 18 during a speech at Roosevelt University. University officials cut his mic during the speech because they were unaware he planned to announce candidacy.

As a community organizer, Green helped to organize demonstrations following the release of bodycam video from the Laquan McDonald shooting.

"I would like to make it clear today, Ja'Mal Green DID NOT QUIT. The elite in this city may think that they won, but I want to make it known that you just messed up," Green's statement read. "You lit a fire in me that burns so bright and will not stop until every ounce of corruption, of segregation, of pay to play politics has been reduced to ashes that the Phoenix of a new Chicago will rise from."