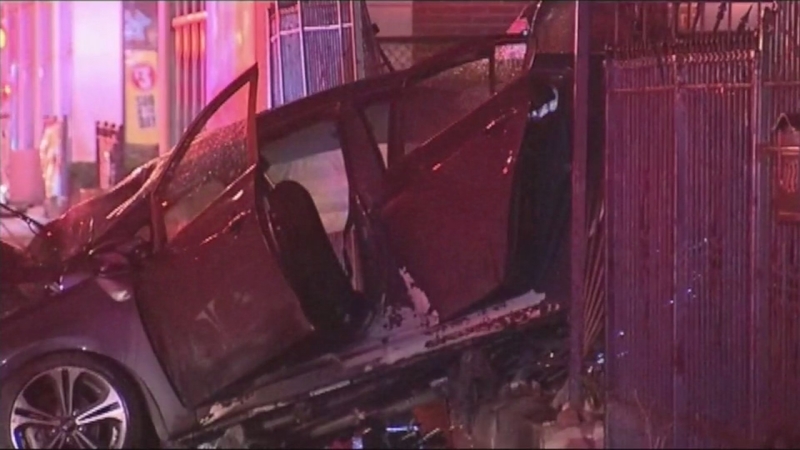 CHICAGO (WLS) -- Chicago police rescued three people from a burning car after a crash in the city's Back of the Yards neighborhood.

"We were listening to the radio. The unit observed the car out of control, landed on the sidewalk. We were the second car. We pulled up and just ran up to the car and started pulling people out," Chicago Police Officer Ivan Romo said.

Police said the car was speeding westbound in the 700-block of West Garfield Park around 11 p.m. Monday when the driver lost control, hit a tree and a metal pole and then crashed into a fence before coming to a stop in front of a house.

"I heard a big boom. Ran out and looked and I saw the car in the yard and there was smoke," Beverly Ennis said.

The police officers pulled three men from the vehicle as it caught fire.

"It was something out of the movies. You see these poor guys trapped in the car, just gotta do what you gotta do to pull them out," Chicago Police Officer Mike Bunyon said.

"Luckily we had seatbelt cutters and all that handy. We were able to get them out right away. And the third guy, we were able to pull out on the other side. Everything panned out. Hopefully they're OK."

All three victims were taken to Stroger Hospital and are expected to be OK.

The home at the scene of the crash, 726 West Garfield Boulevard, is known as the James O'Leary home. It was built in 1901.

James O'Leary was a gambling king who ran a saloon across from the stock yards.

He's also the son of Mrs. O'Leary, whose cow was blamed for starting the Great Chicago Fire.