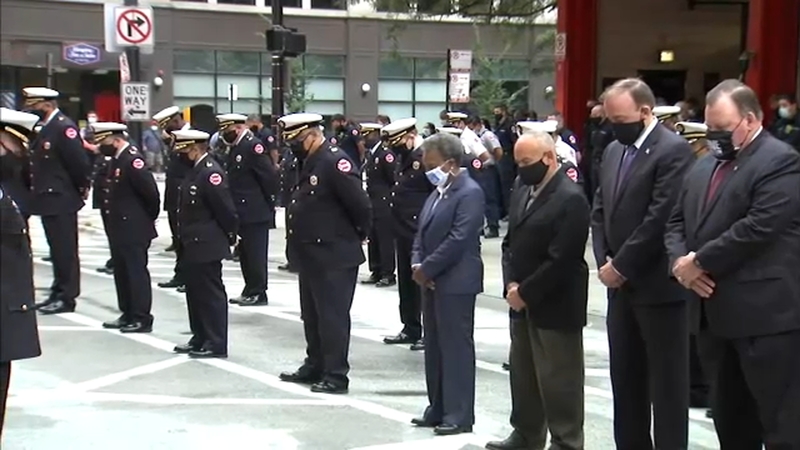 CHICAGO (WLS) -- Memorial across the Chicago area were held Friday to mark the 19th anniversary of the September 11th attacks.

Mayor Lori Lightfoot and the Chicago Fire Department observed a moment of silence at 7:46 a.m. CT, the moment the first plane hit the World Trade Center.

Lightfoot was joined by members of the Chicago Fire Department, as well as other officials.

Mayor Lori Lightfoot speaks after a moment of silence to remember the September 11th attacks.

Chicago Fire Department Battalion Chief Patrick Maloney went to New York the very next day to help any way he could. He and his team stayed on for 10 days.

"Being honored to say the words and ring the bell, it allows us to never forget," Maloney said.

He described the sight as something he and his colleagues were not ready for and said it's a memory he will never forget.

At Friday morning's remembrance ceremony in Evanston, those that were there in New York on Sept 11 also recalled what they saw.

"Those courageous firefighters, the paramedics, the police officers; as everyone was running out of the building, they were running in," said Rabbi Dov Klein.

Here's how the terror attacks unfolded on September 11, 2001.

In Oak Lawn, Cook County Board President Toni Preckwinkle joined officials and members of the VFW POST 52-20 for a moment of silence and a sober remembrance.

Flags in Indiana are also flying at half-staff Friday to remember the victims of 9/11.

The city of Aurora's ceremony was live-streamed on Facebook, including a moment of silence, as well as a wreath-laying ceremony.

A Palatine memorial ceremony at the Palatine Firefighters Memorial at the corner of North Brockway and West Slade streets was held at 9 a.m. The fire department honor guard marched to the memorial from the fire station at 39 E. Colfax St.

Wauconda Mayor Lincoln Knight laid a wreath at the villages Heroes of Freedom Memorial and then observe a moment of silence at 9 a.m.

RELATED: 9/11 attacks: By the numbers

In Gary, a virtual ceremony included lowering the flag to half-staff and a bugler performing taps.

The Mission Bar-B-Que restaurant in Merrillville invited all first responders and military personnel and veterans for a dedication service at 11:30 a.m.

In Roselle, the United Methodist Church is holding an observance at noon at 206 S. Rush Street.

In Naperville, the Exchange Club of Naperville is sponsoring an event at 6 p.m. at the Commander Dan Shanower Memorial behind the City Hall at 400 S. Eagle St.

In Batavia, the Overseas Veterans of Foreign Wars Post 1197 and Auxiliary will host a Patriot Day tribute starting at 5 p.m. at 645 S. River Rd.

In Glendale Heights, the village hosted a silent parade of first responder vehicles and a candlelight service.