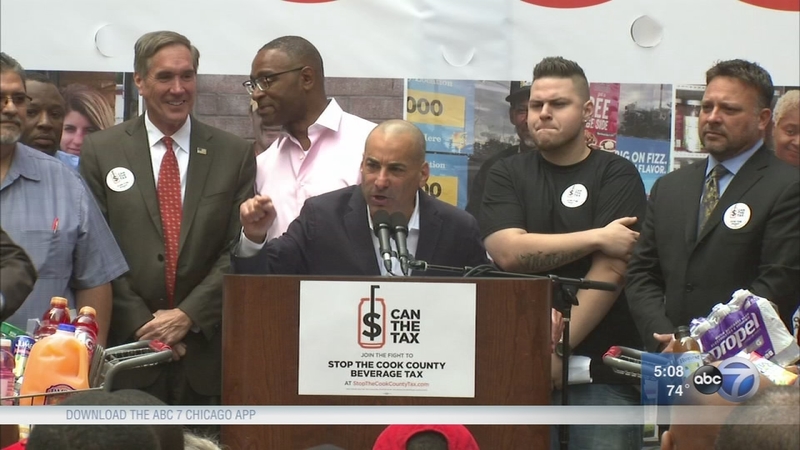 CHICAGO (WLS) -- The rhetoric and the rallies are heating up over the Cook County soda tax a day before some county commissioners will introduce a motion to repeal the unpopular tax.

This tax is turning into one of those seminal issues for Cook County residents and for the commissioners on the county board. On Tuesday, the beverage industry hosted a rally calling for a repeal of the tax and turning up the heat on those commissioners who voted for it.

Opponents of the sweetened beverage tax - including employees of several major soda companies - rallied on the Thompson Center Plaza across from the county building with a message.

"We got to get those commissioners out who are not with us!" said Sam Toia, president of the Illinois Restaurant Association.

The tax passed the county board last November when President Toni Preckwinkle cast the tie-breaking vote. She says the estimated $200 million a year from the tax is needed to balance the budget. But she has also claimed the tax will help reduce unhealthy drink consumption, and in that billionaire Michael Bloomberg, the former New York City mayor has spent over $5 million in ads to support the tax.

"If Michael Bloomberg wants to solve the problem of diabetes, put a flippin' billion dollars into the county health care budget and begin to educate people on what diabetes is," said Commissioner Jeffrey Tobolski, 16th District.

Preckwinkle visited Provident Hospital on Tuesday, where a planned lifestyle center to teach healthy habits won't be built without the tax.

"We can keep these added revenue and Cook County can be healthier and safer and more efficient, or we can get rid of it and go backwards and be sicker, less safe and less efficient," Preckwinkle said.

She continued to rally groups to support the tax.

"This is a tax of choice. The argument being made again and again by opponents that this is tax is all about money, not about health. Well of course it's about funding government services, what tax isn't? Who said it wasn't?" said Elissa Bassler, Illinois Public Health Institute.

"What I've always said is that Toni Preckwinkle and this pop tax must go, and it must go right now," Commissioner Richard Boykin, 1st District.

Boykin, who is considering a run against Preckwinkle, presented a 10-point plan to balance the budget without the tax. He and other commissioners will call for a repeal at Wednesday's County Board meeting. Should that happen, Preckwinkle is expected to veto it.

"I think once we see enough votes to repeal, I think there will be the votes to override a veto," said Commissioner Tim Schneider, 15th District.