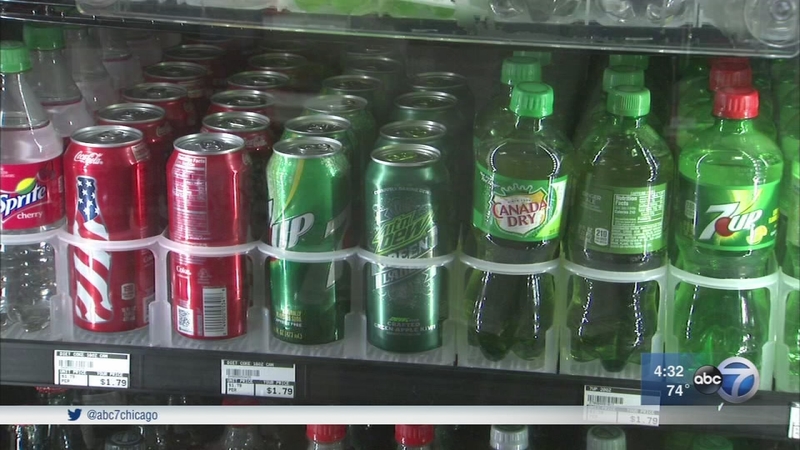 CHICAGO (WLS) -- A group of Cook County commissioners introduced a motion Wednesday to get rid of a controversial sweetened beverage tax, however, the issue was not voted on and instead deferred to a committee for review.

A vote on the repeal is expected Oct. 11, with a hearing for the day before.

Cmsr Morrison: There is not the political will here today to vote on repeal of soda tax. Issue referred to ctte. pic.twitter.com/bwGjDXG5xM

The penny-per-ounce tax on sugary drinks went into effect Aug. 1 in Cook County.
Supporters of the tax said it's going to raise $200 million to close the county's budget gap, pay for doctors and nurses in county hospitals and help build a new center for education about healthy consumption.

"We can keep these added revenue and Cook County can be healthier and safer and more efficient, or we can get rid of it and go backwards and be sicker, less safe and less efficient," Cook County Board President Toni Preckwinkle said.

"The long-term effects from obesity are too costly to ignore, the cost to Chicagoan's health and the health system are simply too great," said Dr. Clare Crosh of Advocate Health Care. "So please help me, help my patients, do not repeal this tax."

Those who oppose the tax include beverage company employees, who rallied against it Tuesday, and several county commissioners. Polls show a vast majority of Cook County residents oppose the tax.

"By instituting this selective tax that is not found in other counties, Cook County is not altering the choice of a beverage and instead it is moving the purchase of the whole meal to another county and another tax location," said Tim Banks, a Culver's restaurant owner. "The end result is lower sales for our restaurant and lower taxes for this county."

Chicago activist Father Michael Pfleger said he is not a fan of the soda tax in a Facebook post.

"I have NEVER been a fan of this Pop tax and hope it is repealed...but for Bloomberg to now declare that he will spend whatever is necessary to get County Commissioners re-elected takes this to another whole level...Trying to BUY this tax and coming elections I believe is going to backfire....." wrote Pfleger.

"Many of you are up for reelection next year," said Carol Bollacker of Boz Hot Dogs. "Don't make this your Michael Bilandic moment."