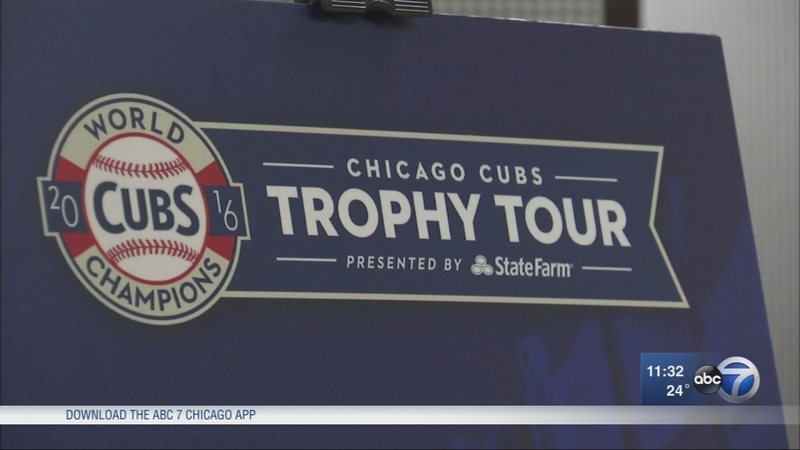 CHICAGO (WLS) -- Some Chicago Cubs fans will do just about anything to support their team. That includes waiting outside in frigid weather for a chance to see the World Series trophy.

"I'll stay out here five hours. This is like hitting the lottery," said David Patridge, a Cubs fan.

"Oh my God. I haven't been able to get my picture with the Stanley Cup. I heard about this world championship trophy being here and I'm like, 'I have to be here,'" said Traci Brant, another Cubs fan."

The Cubs arranged the trophy tour to share their historic hardware with fans across Chicago and the Midwest.

"Unreal. I still can't believe it. I'm still waking up in the middle of the night. We won the World Series, right?" said Patrick Hozjan, a die-hard Cubs fan.

After a series of appearances in Chicago, the Commissioner's Trophy will hit the road to go on display in Champaign, Peoria, South Bend and the Quad Cities.

Cubs fans are still reveling in the glory of a championship win 108 years in the making. Eric Campbell was just happy he would be able to share his picture with the trophy with family members who are Chicago White Sox fans.

"It'll be their Christmas present. I'll put it in their stockings," Campbell said.

The trophy will be delivered to the building at noon Friday. It will stick around until 3 p.m. If fans can't make it downtown Friday, the trophy will be on display at City Hall from 9 a.m. - 4 p.m. on Dec. 15.