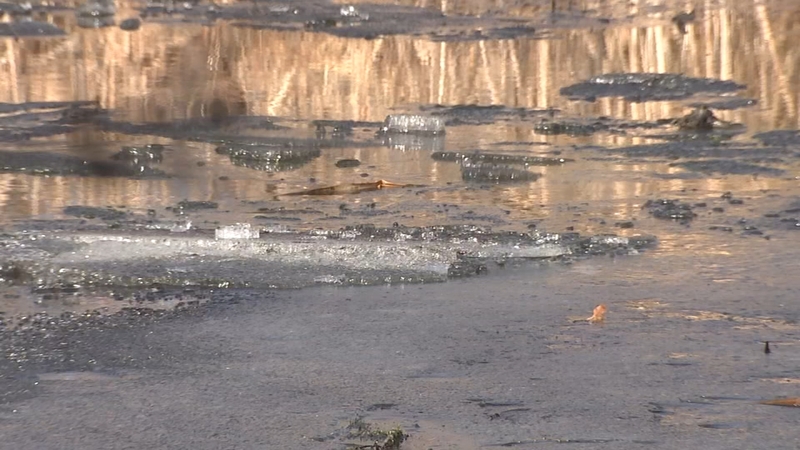 DEER PARK, Ill. (WLS) -- A family was safely rescued from a pond in the far northwestern suburbs after they tried to save their dog trapped in the icy water.

"It's your worst nightmare, where your child is stuck and in a very precarious, dangerous situation," said Lucia Feczko.

Feczko said she knows this was a tragedy averted.

"You're just sitting there, thinking, oh my gosh, this is it. This might be the end. What's going to happen? What if I can't save my son?" she said.

After a day of playing outside in the springlike weather, the family dog Abby got out from their backyard in Deer Park.

It was getting dark and Feczko's two 12-year-old sons went after her.

"The dog had went on to the pond and she had fallen into the mud ice water," she said.

By the time Feczko got there, her kids were stuck in the muck and ice, trying to rescue the dog.

One boy and the dog escaped. One was still trapped.

"And so, I instinctively went to go get him," Feczko said.

She said she was able to grab her son and pull him out onto some ice, but then she became stuck in the freezing water.

"She was above the water talking to us," said Justin Brooks, a Lake Zurich firefighter and paramedic. "I was able to get a hold of her."

Brooks geared up for the water rescue and went in.

"It's cold and you're worrying about the woman who isn't wearing a protective suit like I am, that has been sitting in this for, she says, about 15 minutes before we were able to get on scene and get to her," Brooks said.

Feczko said she knows she and her kids should have called 911.

Firefighters don't fault her for jumping in to save her kids, but they said part of their job is to rescue animals in need as well.