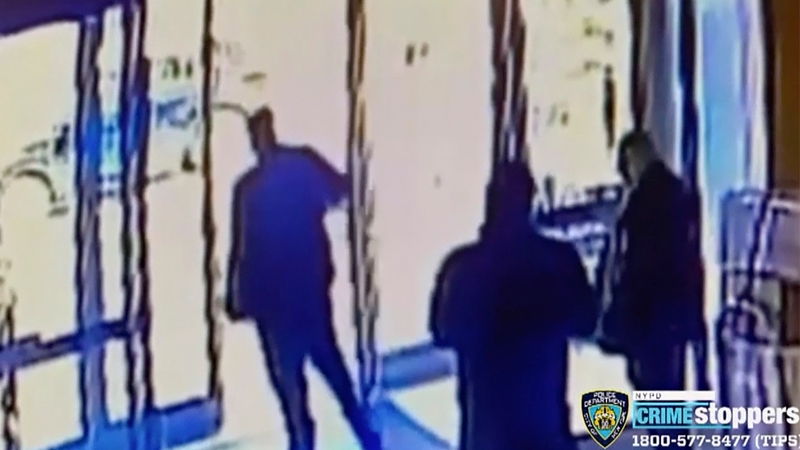 NEW YORK CITY -- Two doormen on duty during last week's vicious attack against a 65-year-old Asian woman have been fired.

Security camera video from the March 29 assault shows the doormen fail to help the victim outside the Manhattan building.

The men watched from the lobby as 65-year-old Vilma Kari was repeatedly kicked and stomped, the video showed.

Kari was on her way to church at the time of the assault.

One of the men also closed the lobby door, but then emerged to assist the victim and flag down an NYPD vehicle.

During the attack, they allowed someone to leave the building.

"While the full lobby video shows that once the assailant had departed, the doormen emerged to assist the victim and flag down an NYPD vehicle, it is clear that required emergency and safety protocols were not followed," the company said in a statement.

Jim Dolan has more on a woman who is on a mission to help her fellow New Yorkers feel safe.

Kyle Bragg, the president of 32BJ SEIU, the doormen's union, released a statement and said the union played no role in the decision:

"The doorman and concierge were previously, incorrectly described as security officers. Contrary to published reports, the Union did not play any role whatsoever in this decision. Also, not accurately depicted, the workers did assist the victim and flagged down the police, as was shown in a longer version of the building's camera footage. Under their collective bargaining agreement, both employees have the right to file grievances. There is a contractual process to challenge terminations. The employees have initiated that process, but the process is just beginning and can take weeks or months. 32BJ is a union comprised of majority immigrant, Black and brown workers. We take anti-Asian hatred, and all forms of discrimination, seriously. 32BJ members are immigrants and people of color themselves, subject to much of the same racism and violence that our AAPI neighbors face. We believe we must root out systemic racism in all its forms. We believe that all union workers, especially workers of color who are often the subject of unfair treatment on the job, have a right to a fair process as outlined in their contract."

Brandon Elliot, 38, was indicted by a grand jury in the incident on Monday.

Elliot, convicted of killing his mother nearly two decades ago, was charged with assault and attempted assault as hate crimes. He is scheduled to be arraigned on a felony indictment on April 21. His lawyers have urged the public to "reserve judgment until all the facts are presented in court."