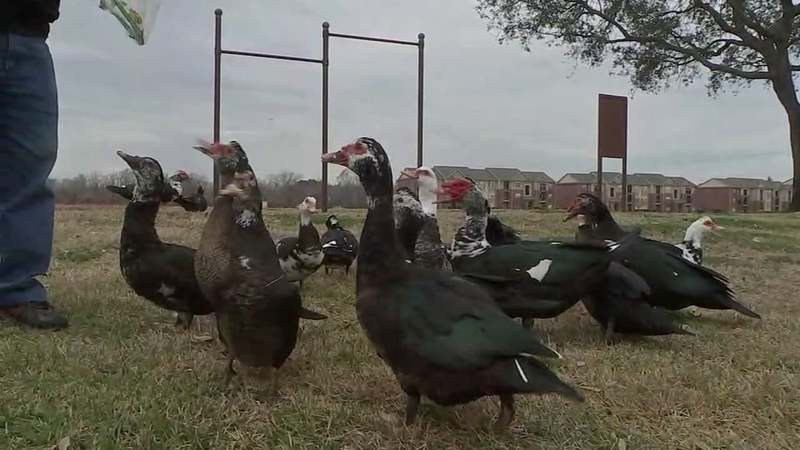 Ducks shot with arrows in Pearland

PEARLAND, Texas -- For many people who live in or near the West Oaks neighborhood of Pearland, Texas, the ducks are part of the community.

"My granddaughter loves it but it's too cold for her right now, she's home," Rafael Lopez said.

What they found is like an arrow through their own hearts.

"People are pretty upset in the neighborhood," Carl Dalton said.

Several ducks have been found with arrows stuck in them.

"They were in the flower beds and there was three of them at one time that had the arrows in them. One was shot and two had them in their leg," said Dalton.

No one knows if someone is trying to get rid of the ducks in the area or intentionally being cruel using some type of bow.

Pearland Police and Animal Control say they've received several calls about the injured birds. They say if someone has an issue with the birds, there are animal control measures to relocate them. This behavior could bring an animal cruelty charge.

"There's always going to be potential for a dangerous situation when you involve weapons such as what we're finding in the general public," Officer Jason Wells with the Pearland Police Department said. "We would encourage everyone to act with safety as a paramount as up front and first, we don't want anybody to get hurt."

Neighbors warned whoever is hunting the ducks, they are now on the lookout for them.

"If I see somebody, I'll call the police," Lopez said.

"Let's hope we catch them and see what happens, I guess," Dalton added.

Two of the ducks were taken to Houston's SPCA Wildlife Center of Texas.

Executive Director Sharon Schmalz said one had two arrows in it and another in the joint of one of its legs.

"It's really sad and dangerous because there could be people around, it could ricochet, they could hit somebody in the eye," she said. "So not only is it mean and harmful to the animal, it's a dangerous thing for people especially in the neighborhood pond like that."