Charges pending against suspect in Jaslyn Adams murder, shot by CPD after I-290 chase, attempted carjacking 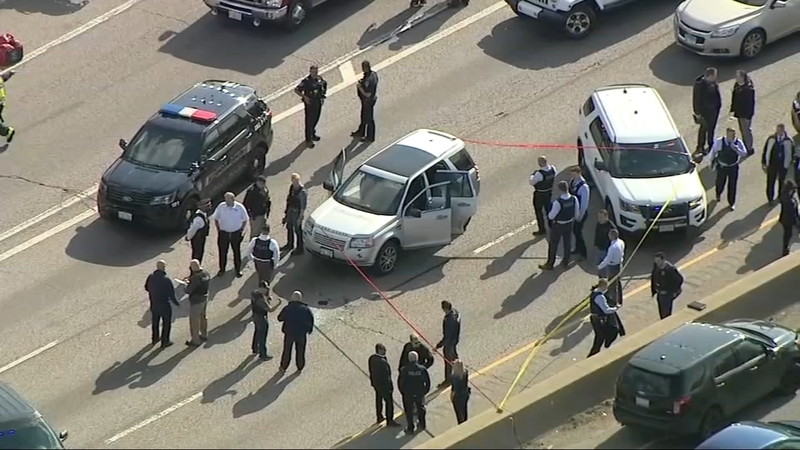 CHICAGO (WLS) -- Charges are pending against a suspect in the murder of 7-year-old Jaslyn Adams, who was shot by CPD officers on the Eisenhower Expressway after a chase Thursday afternoon.

CPD Superintendent David Brown said around 4 p.m., officers were in the western suburbs surveilling a suspect in the Adams' murder. When they tried to pull the suspect over while heading east on I-290, the suspect fled and crashed on the side of the highway near Mannheim Road.

He then attempted to carjack another family's car that had stopped in the traffic on the expressway, police said.

Illinois State Police, who also responded to the scene about 4:15 p.m., said the man shot at police before CPD officers shot at him, hitting him in the arm. He was taken to a local hospital for treatment and is expected to survive, police said.

"We prayed for justice and we got it," said Tawny McMullen, Jaslyn's aunt.

Jaslyn's family heard about the police pursuit as it happened, but didn't realize it was related to their daughter's death.

"OK, they caught one," McMullen said. "But go get the rest of them. I am quite sure there is more out there. Get the rest."

In video recorded by a witness moments after the shooting, a man is seen injured, sitting on the expressway before police officers escort him to an ambulance.

Illinois State Police said the suspect fired at Chicago police after he tried and failed to carjack the family on the interstate, after which officers shot him and arrested him. Thursday night, Supt. Brown was not as firm.

There were at least two guns found in the suspect's car, though investigators have not yet said whether they were used in Jaslyn's murder.

Jaslyn was shot and killed Sunday while sitting in a car with her father at a McDonald's drive-thru in Homan Square.

"So sweet. Such an angel. She was an angel, harmless," her aunt said.

Police provided few details on that investigation, but Brown said that other people were involved in the incident, and they are currently working on that aspect of the investigation.

Brown did say Chicago police believe Jaslyn's father was the target of the shooting.

The Civilian Office of Police Accountability is investigating the police shooting.

The family is now waiting for charges to be filed against the suspect.