Jimmy Kimmel gets ready for an unpredictable night at the Emmys

Celebrities will be broadcasting live from over one hundred different locations around the world...what could go wrong?
OTRC 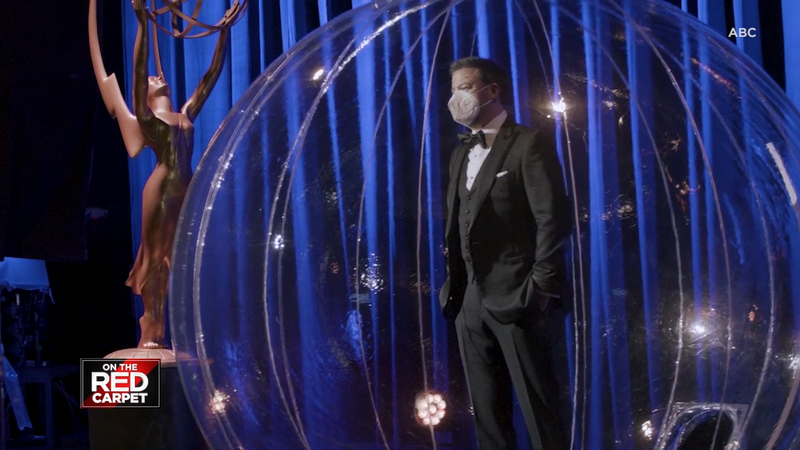 Jimmy Kimmel gets ready for an unpredictable night

LOS ANGELES -- Late-night host Jimmy Kimmel has made one thing clear when it comes to hosting Hollywood's first big broadcast amid COVID-19: He's ready to welcome disaster and turn it into a huge laugh for audiences at home.

"I do secretly like it. I do enjoy the potential for disaster. Not as much as I enjoy an actual disaster," said Kimmel.

Kimmel's preparations for the big night include: vigorously disinfecting trophies, isolating himself in a plastic blow up ball and dusting off the tuxedo he wore to host the Oscars.

"We're trying to play it safe and we're going to ridiculous extremes to keep it as safe as possible," the host said.

The network has released a first look at the hazmat-suited trophy presenter. The dapper suit, which is a mix of both visual entertainment and safety, was created by costume designer Katja Cahill and executive producer Guy Carrington, who worked with a hazmat suit manufacturing company to design the ensemble. This begs the question: Will they physically be handing out Emmys this year?

When ABC7 Entertainment Reporter George Pennacchio asked Kimmel how the trophies will be distributed, the late-night host responded, "Have you ever heard of DoorDash?"

Hosting a live awards show with talent participating from over one hundred different locations around the world is surely a feat, so other virtual ceremonies this year have had nominees pre-record their acceptance speeches to avoid any mishaps.

"We decided immediately that that is no fun for anybody and you know what? If they win and they can't be on live, then I will accept the Emmy for them and my son will throw it on the ground and smash it," said Kimmel.

Having celebrities call into the show live to accept their awards presents even more challenges, including relying on the nominees' internet speeds to keep the show running smoothly. Not to mention the possibility of interruption -- anyone who has been working at home with children can relate.

"We've all seen celebrities in their homes for talk shows," Kimmel said. "But to see the nominees surrounded by their families when they win an Emmy, I think that is kind of... it's more fun than seeing them surrounded by their producers," said Kimmel.

While select special guests will join Kimmel on the stage during the ceremony, the audience will remain empty.

"There will be no one laughing at my jokes...which won't be that much different than usual," Kimmel joked.