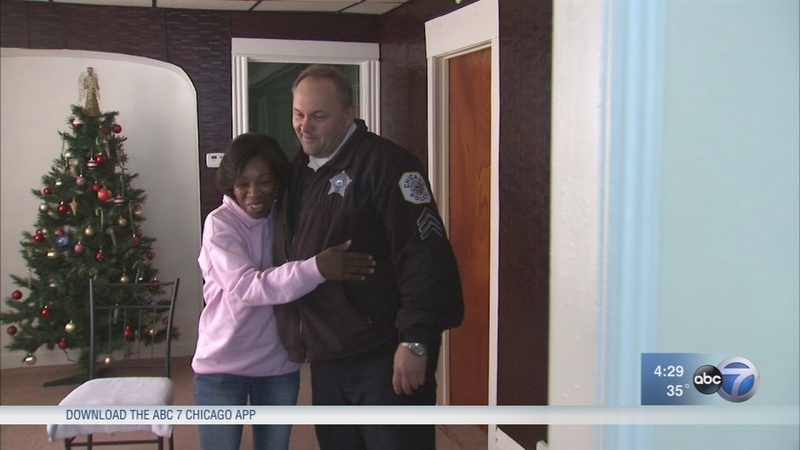 CHICAGO (WLS) -- When officers found three girls living in squalor in Englewood their paternal grandmother stepped up to raise them. But those officers have stayed involved in their lives.

The officers in Englewood can't emotionally let go of the situation they encountered, seeing three girls living in squalor. Not only are they making sure the girls are being cared for, in the past few weeks they have spearheaded a community-wide effort to help Delores Anderson, the grandmother who stepped in to raise the children.

Anderson calls the officers her angels, and gets a visit or call from a 7th District police officer almost daily. The 53-year-old said the Englewood cops have made it possible for her to take on a huge and sudden responsibility.

About a month ago, Officer Michael Cleary was called to an abandoned South Side two-flat for a well-being check, where he discovered the three girls, aged 7, 2 and 1, all alone inside, living in deplorable conditions.

"I was sick to my stomach. I have children of my own, it hit home," Cleary said.

By the time Sgt. Charles Artz arrived on scene the girls were huddled together in a bedroom.

"There was garbage everywhere, feces in one of the bedrooms. The bedroom they were in had a very dirty, dirty mattress that they were huddled on," Artz said.

Artz said the girls looked malnourished and the older one had been physically abused. The sergeant found out she had never been to school.

"That is the part of the story that kind of hit me the hardest; the fact that this beautiful 7-year-old girl had never spent a day in school," he said.

Police tracked down the girls' paternal grandmother. Without hesitation, Anderson said she would raise the children, but it meant losing her jobs to have time to take care of them. That is when officers stepped in and stepped up to help.

"We provided her with diapers, milk. Any assistance possible," Cleary said.

"At no time did she want anything for herself. She just wanted the bare essentials to take care of her children," Artz said.

The officers said every from the district has helped. One officer even contributed his overtime pay to help the new family. They have not only bought supplies for the kids, they set up a Christmas tree and have given the girls their first-ever birthday parties. The officers are also involved in making sure the oldest child is placed in a good school.