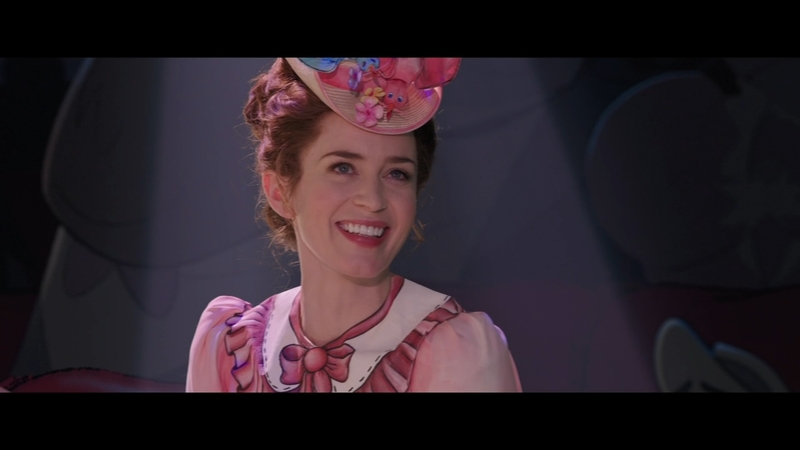 Emily Blunt brings Mary Poppins to life, with a twist

Actress Emily Blunt is the new nanny, who will charm audiences - without - a spoonful of sugar.

"No one wants to see me impersonate Julie Andrews. No one can out-Julie Julie," Blunt said.

Not many actresses would be brave enough to take on such an iconic role, but the 35-year-old British actress did - working to make it her own, with the help of the original P.L. Travers books.

"She's quite eccentric, rude and vain in the books, and funny and completely unknowable, you know? That's what I fell in love with. This duality of this character, who is stern and a bit of a disciplinarian - and yet, a bit of an adrenaline junkie," Blunt said.

Yes, that is Blunt's own singing voice in the film.

Blunt is married to actor/director John Krasinski, who recently graced the cover of Smithsonian Magazine.

The film features Lin-Manuel Miranda, the man who brought Alexander Hamilton to life in "Hamilton: An American Musical".

Miranda plays Jack, a lamplighter who knows the magic of Mary Poppins. He chose this movie to be his first big project after leaving Broadway because of the film's director and star.

"Honestly, the chance to work with Rob Marshall and Emily Blunt, two people at the top of their craft. I think Rob creates the gold standard when it comes to movie musicals. I was going to see how one of the best in the world does it - like, really does it," Miranda said. "So, it was just a dream come true for me."

There's some heavy-lifting in the dance department for Jack.

"Yeah, if you noticed in 'Hamilton' there's incredible dancing in that show. Hamilton doesn't do a ton of it. It's all around him," Miranda said. "Rob and his incredible creative team, they set you up to succeed. It's so much rehearsal. It's so much prep. The feeling of mastery when you actually get to do it on the day - it's thrilling."

Miranda was star struck by his veteran co-stars, including legendary actor-comedian Dick Van Dyke, 92, starred in the original film more than 50 years ago.

"From Angela Lansbury to Colin Firth to Meryl Streep to Dick Van Dyke, every day is a sort of master class with a different person," Miranda said. "That's how I felt. It's my first movie on this scale and I felt like a student."

Maybe 1930's London was on his mind, but so is modern day Chicago.

"My 'Hamilton' cast is still kicking butt over there. I checked in on them a few months ago. They were just wonderful," Miranda said.

The original "Mary Poppins" was always special for Rob Marshall. Directing the sequel may be even more so.

Marshall was behind the camera for "Mary Poppins Returns," which hits theaters on Wednesday. Directing the sequel was special.

"I wanted to pay great tribute to the first film because it means so much to me and in a way wanted to protect it," he said.

That's because the original "Mary Poppins" was the first film Marshall, then 4 years old, ever saw.

"I use myself as a barometer what would I want to see if I came to see a Mary Poppins sequel and I'd want to see a live action animation sequence for instance and drawn the way it was originally. And I would want to see a big athletic production number like we have with 'Trip a Little Light Fantastic.' I felt there things in the DNA of Mary Poppins that needed to remain," he said.

There was no arm-twisting when it came to casting the sequel.

"This is a dream cast. Everybody I asked said 'yes,'" Marshall said.

"He lifted our set - I can't tell you - through the roof," Marshall said of Van Dyke. "He said to me when he walked on the set, 'I have to tell you something, Rob. I feel the same spirit here as I did on the first film.' And for me that was the greatest compliment ever."

Speaking of compliments, Marshall has one for Chicago.

"It's such a great city," he said, noting that he performed here.

Marshall has been tapped to direct a live-action version of "The Little Mermaid," teaming with Miranda, who is co-writing the music.

The Banks children are all grown up

In "Mary Poppins Returns", the nanny's former charges are 25 years older and times are harder and sadder for the adult duo. Ben Whishaw plays Michael Banks.

"I was an obsessive fan of 'Mary Poppins' - as a 3-year-old. Absolutely insane about it. So it was really important to me," Whishaw said.

Emily Mortimer plays Jane Banks. She said they did not try to create grown-up versions of the originals.

"I think it felt important, didn't it? To sort of make the characters our own," Wishaw said.

"Yes, and not get too hung up on trying to copy the mannerisms of the kids. Anyway, kids change so much. They all turn into their parents," Mortimer said.

In the sequel, the original Jane makes a cameo.

"She told us all about how - I hadn't realized until talking to her - that they'd shot the original movie in Los Angeles on a soundstage. Not in London at all," Mortimer said.

Whishaw and Mortimer sing in "Mary Poppins Returns". It's a talent they didn't know they had.

"I can't sing, but he can sing. He didn't know he could sing until he did this film. He'd never done it before and he's amazing," Mortimer said of her co-star.

Both actors have spent very short stints in Chicago, but Mortimer makes her affinity for Chicago rather unusual.

"My favorite movie is 'Calamity Jane.' They go to Chicago and they sing that song, 'I just got in from the Windy City, the Windy City is mighty pretty," Mortimer said. "There's a great line in it that goes, 'In the name of civic virtue, they've got fountains there that squirt you!"