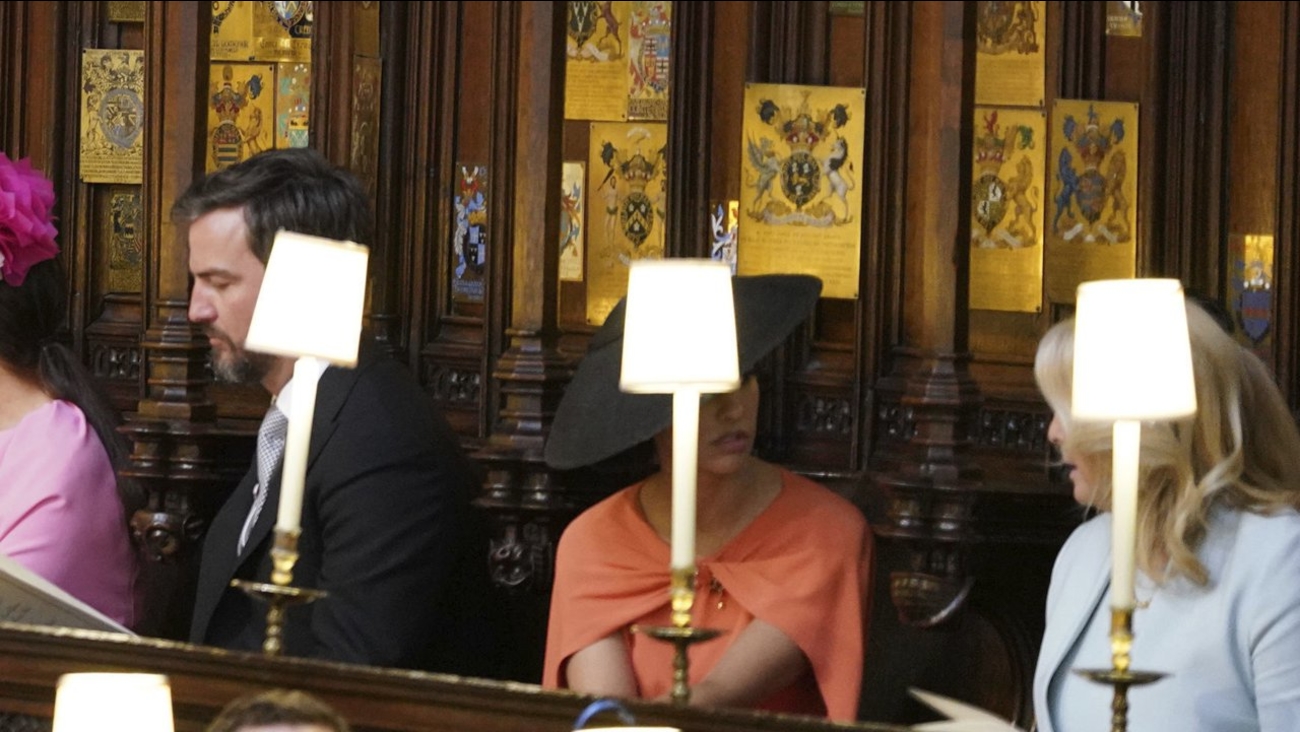 Markus Anderson, Janina Gavankar, and Jill Smoller are seated prior to the start of the wedding ceremony of Prince Harry and Meghan Markle at St. George's Chapel in Windsor Castle (Dominic Lipinski/pool photo via AP)

Janina Gavankar, Star Wars actress and friend of Meghan Markle's, was among the guests at the royal wedding Saturday. And she got a lot of attention for her orange ensemble.

But Gavankar and her stylist Niki Schwan said finding a designer was harder than expected.

"As many do for events of this kind, my stylist @NikiSchwan & I reached out to designers and showrooms. ...No one was responsive. Luckily, @westerncostume generously opened the doors to their private vintage archive, and we chose this 1930's dress and 1940s hat," Gavankar tweeted.

Gavankar said they paired the outfit with Coomi Jewels, Sigerson pumps and a YSL clutch.

"Strange to be talking fashion on a powerful day of love and union," Gavankar said of her friend Meghan's wedding day.

Thank you to everyone inquiring about today’s dress! Here’s the real story:

Gavankar tweeted she was "emotionally hungover" as she headed to the airport Sunday.

Gavankar, perhaps best known for her roles in "True Blood" or "The Vampire Diaries," is also featured in "Star Wars: Battlefront II." According to a post by Markle last year on her now-deleted Instagram account, they have been friends for over 15 years.

Like every good royal wedding, it was all about the hats, the dresses and the posh tails, with some standouts in the rush inside at Windsor Castle.

Amal Clooney was undeniably regal in a mustard yellow dress with a long tie in back that bordered on a train as she glided into St. George's Chapel on Saturday, her actor husband, George Clooney, at her side in neutral grey, for the wedding of Prince Harry and Meghan Markle.
Granted, it's difficult for Ms. Clooney to merely blend in, but her jauntily tilted and perfectly matched wide-brim hat, a dainty veil in front, contributed to gasps, both online and in the crowd that lined the church route.

Early guests included Oprah Winfrey in tiered Stella McCartney pink and a matching statement hat. Victoria Beckham, meanwhile, a close friend of the groom, blended quite nicely in dark navy, a peekaboo slit at the front of her dress that fell well below the knee, as she attended with her husband, soccer star David Beckham.

It was a very different royal wedding for Pippa Middleton, the sister of Kate Middleton. Pippa received a lot of TV time at the last British royal wedding when she was fussing with the train on her sibling's dress. This time around, the now married and newly pregnant Pippa was in demure mint green, a matronly bun under her small hat.

New mom Serena Williams walked slowly inside in soft rose, a high fascinator on her head and a chunky gold necklace around her neck.
Princesses Beatrice and Eugenie, cousins of the groom, went for understated hats this time, in sharp contrast to their exuberant head gear at the 2011 royal wedding of Prince William and Kate.

Elsewhere among the 600 invited guests were pops of royal purple in dresses and ties with a healthy dose of spring pastels.

One male guest came in formal long shorts - all the better to show off his two prosthetic legs. Another donned a top hat as the crowd lining the wedding route cheered the lucky guests.