Toddler, 3, killed after struck by semi-truck on North Side while in bike child carrier identified

The mother lost control of the bike, causing the bike to fall over with the girl in a child carrier, police say
WLS
By Evelyn Holmes, Eric Horng and ABC7 Chicago Digital Team 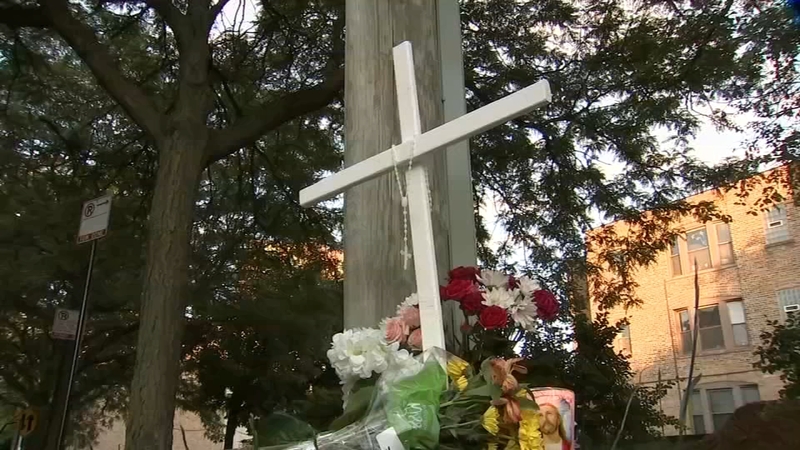 CHICAGO (WLS) -- A 3-year-old has died after being struck by a semi-truck on the North Side Thursday morning, according to fire officials.

It happened around 8:15 a.m. in the 1100-block of West Leland Avenue in Uptown Thursday, officials said.

The semi was pulling away from a stop sign at Leland and Winthrop avenues around 8:15 a.m. when it knocked the mother off balance and the girl was thrown from a child carrier on the bike, according to a police report.

The girl's father, who was following on his own bike, said his wife was "crowded" between the semi and the ComEd truck. Other witnesses said the mother was startled when the semi started moving, tried to regain her balance and was clipped by the truck.

The child fell off the bike and was dragged by the semi for more than 20 feet, the police report states. The child was wearing a helmet and was sitting in a child carrier attached to the rear of the bike, police said.

"We just heard screaming and then we turned around and, I'm assume it was the father, just pounding on the truck to back up so they could pull the child out from under it," said Tim Bartsch, witness.

She was identified Elizabeth Grace Shambrook. Her father said she went by Lily Grace.

Her father said the accident was entirely preventable. He is upset the ComEd truck was parked in the bike lane, and that the semi was driving down a residential street.

He said his daughter was "awesome," smart, and made them laugh, and now she is gone.

"I can't imagine what a parent goes through," said 46th Ward Alderman James Cappleman. "This will be something that will haunt this parent for the rest of her life."

ABC7 has learned the ComEd truck was cited for blocking at least part of the bike lane. And Ald. Cappleman said even before the accident there's been talk of adding a "bump out" to that stretch of Leland Avenue. "Bump outs" extend the curb and slow down traffic.

"We've taken the steps to make it safer, but obviously we need to make it more safe," Cappleman said.

ComEd issued a statement saying, "ComEd was issued a permit by the Chicago Department of Transportation to perform work in the area, however, our investigation into the accident is ongoing."

"For some reason there's always 18 wheelers, all food trucks, going down here all the time," Bartsch said. "The Christopher House is right there with kids playing all the time. It doesn't make any sense why Leland is a massive intersection for 18 wheelers."

The collision happened on a street with unprotected bike lanes, which means there are no barriers between riders and motor vehicles. The Active Transportation Alliance said that needs to change, releasing a statement saying in part, "This crash is just the latest tragic example that even designated bike routes like Leland are often unsafe and uncomfortable for people biking."

Police are still investigating the incident with the assistance of the Major Accident Investigation Unit.