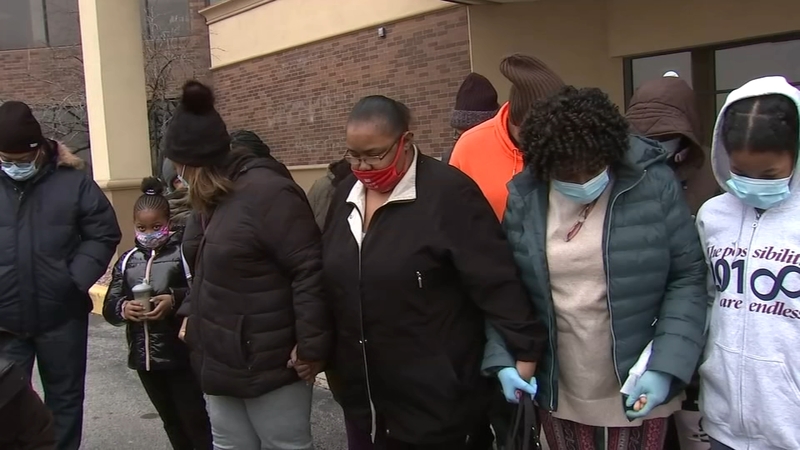 MATTESON, Ill. (WLS) -- Thirty Richton Park families left homeless from a devastating apartment fire have been staying at a Holiday Inn in the south suburbs and got a huge surprise Monday morning.

A Mega Food truck in the parking lot of the Matteson Holiday Inn came loaded with food to give dozens of families devastated by an apartment complex fire enough for one week.

The families are also just finding out they won't have to leave the hotel Monday because their stay has been extended through the week.

Carolyn Jones and her granddaughter lost everything in the fire.

"I am surprised cause I wasn't expecting this so big surprise, but I'm thankful and grateful to God that they are," Jones said. "They didn't just kick us aside and forget about us."

Last Friday morning, a kitchen fire broke out in an apartment in the 3800-block of Canterbury Court in Richton Park. Fortunately, no one was hurt, but dozens of families lost everything.

The families were transported to a local high school gym where they were being housed.

That's when local businessman Early Walker, Matteson Mayor Sheila Chalmers-Currin and a Rich Township Democratic Committeeman Calvin Jordan stepped in to arrange the hotel and pull together local merchants such as Walmart and Meijer, who have donated towards the cause.

"We literally threw this together in less than 24 hours and we are going to be doing more but i am excited with what we've been able to accomplish," Walker said.

"This is a neighboring community. I mean they're just north of us. I mean how could we not support them," Mayor Chalmers-Currin said.

"This is devastating and right after thanksgiving and going into Christmas and as they said earlier what we're dealing with the coronavirus, we have to do things I mean we have to be neighborly," Jordan said.

Meanwhile a long-term plan for permanent housing is in the works.

"Right now, it's a work in progress but we are talking to our local apartment complexes and even leasing companies and agencies in the region to help support finding some housing," said Richton Park Mayor Rick Reinbold.