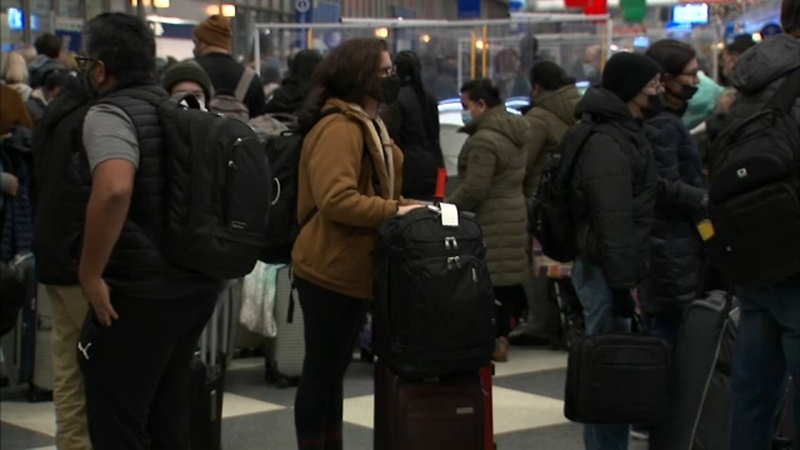 CHICAGO (WLS) -- A hectic day at O'Hare as people are running into some travel woes, now spending their New Year's Day at the airport with cancelations and delays across the board.

"It's too long and there's no space to spend the time, get something to eat, it's a long time here," said one traveler heading for Spain.

That's the case for thousands of flights nationwide, many of which are scheduled to come in and out of Chicago.

Several airlines like United and American are blaming the flight issues on crew shortages driven by COVID-19 as well as severe weather nationwide.

Chicago is getting a taste of that weather Saturday with several inches of snow, forcing delays from 15 minutes to over 24 hours.

"30 minutes, I can handle that, as long as I'm not spending the night here I'm good," said Sylvia Robinson visiting from Houston.

On top of the delays and cancelations, the surge of COVID-19 cases in recent weeks is also worrying some passengers, many of them realizing these airports are returning to pre-pandemic levels.

"That's hard, I'm not used to it," said Robinson. "Last year I was traveling and there was no one here, which was kind of eerie so I like to see the people but this is a lot of people."

As of 5 p.m. Saturday, O'Hare has canceled 848 flights and another 273 have been canceled at Midway.

According to Flight Aware, O'Hare has been the busiest airport in the nation in the last two weeks.