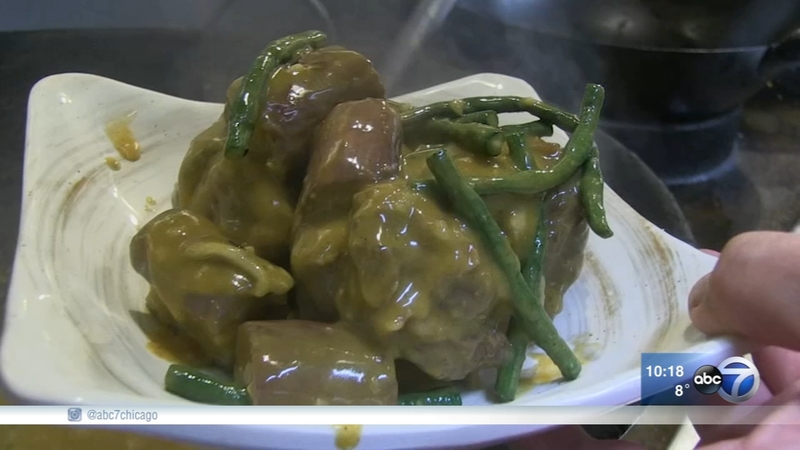 CHICAGO (WLS) -- There is only one Chicago area restaurant combining both Filipino and Cuban cuisines in the city's Ravenswood neighborhood.

Bayan Ko is a result of the origins of the husband-and-wife owners, and sits just beneath the Montrose stop on the CTA's Brown Line.

The similarities between Cuba and the Philippines are more prevalent than you'd think.

"We're both island cultures, so we have lots of tropical influences," said co-owner Raquel Quadreny.

Quadreny's family is Cuban -- by way of Miami -- while her husband, Lawrence Letrero, is Filipino. How does he approach a Cuban croqueta stuffed with ham and cheese? Call them croqueta tots.

"That's our take on a traditional croqueta. We do smoked ham hocks and we feature Jufran aioli so that's Filipino," she said.

That banana ketchup-turned-dipping sauce is a revelation. So is the Cubano sandwich, assembled in typical fashion: mustard of course, but also a sour orange mojo with oregano and pork jus - plus Swiss, ham, tart pickles and lovely roasted pork.

"We marinate the pork in house," she said.

Griddled first open-faced, then smashed together and griddled again, it's outstanding.

Their lechon will be familiar to ex-pats. The pork belly is simmered with garlic, peppercorns and bay leaf for three hours. Then he salts the skin and deep fries it, so there's that contrasting texture, plus the addition of pickled papaya for vinegary bite. And speaking of vinegar, it makes plenty of appearances, especially in sauces and condiments.

"The vinegar is very prominent in both of our cultures," said Quadreny.

Hard-core Filipino eaters will dig the kare kare - slowly braised oxtail is stir-fried with eggplant, Chinese long beans and a hearty peanut sauce, before being served with a funky, fermented shrimp paste for dipping. Their pancit noodles are almost more lo mein-like, but it's the vegetables they cook along with them that give the dish its backbone.

"We use napa cabbage, carrots and shitake mushrooms and it's a stir-fry," she said.

Now at first glance, you might not think the countries have that much in common, but think about it: they're both island nations, they're both quite tropical and they both love pork, whether it's pork belly on the Filipino side, or in the Cuban sandwich. And remember, the restaurant is BYOB.