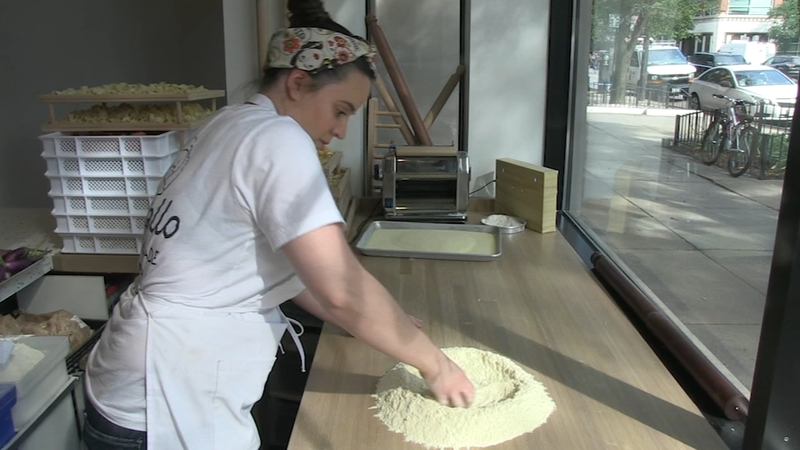 CHICAGO (WLS) -- Columbus Day is a day when Italian pride swells in Chicago and around the country, but for ABC7 Chicago's Hungry Hound it means it's time for pasta.

This week, Steve Dolinsky has found a place in Wicker Park where they're not only making everything by hand in-house, but they're also offering some shapes and combinations you may not have seen elsewhere.

The owner of Tortello has grandparents from Venice and Sardinia, and both sides of his family were into food long before he was born. That family tradition means an appreciation for Italian ingredients and a dedication to the craft of pasta making - which requires a lot more than just imported flour, water and eggs.

"Tortello is a pasta shop and a restaurant," said owner Dario Monni.

ABC7's Steve Dolinsky tries a pair of desserts on the menu at Tortello in Wicker Park, including an old fashioned tiramisu.

Monni said the ingredients he uses are pretty simple.

"Semolina and water. We import the flour from Italy, which is a big deal," he said. "For example the chiusoni, as the tortelli and the capelli del prete, we make one by one. By hand. On the window. So it's something that bring north of Italy and south of Italy."

The shop's namesake is a humble hat-shaped pasta with a labor-intensive backstory.

That semolina-water mixture is kneaded by hand, then passed through a pasta sheeter several times, until it's as thin as paper and as long as a surfboard. It has to be measured and cut into squares, then carefully filled with whipped burrata, plus ricotta, butter and salt.

"We fill with fresh burrata from Puglia. We cook with butter and sage and we put the hazelnut on top," said Monni.

Tiny strands of pasta will eventually be made into chiusoni. After they're rolled into narrow tubes, they're cut-up, tossed with semolina, and then rubbed down the side of a tool that gives them their unique shape so the sauce clings to it better.

"Every shape of pasta we combine with the right sauce," he said.

That chiusoni gets married with sausage, saffron and cream, before it's plated and then topped with some Pecorino Sarda cheese and parsley.

"The bucatini we combine with fresh tomato and beautiful pieces of lobster," said Monni.

The bucatini is finished with a healthy drizzle of olive oil and a shower of fresh chives, giving common spaghetti a run for its money. There's also lumache, which is a sort of a gargantuan macaroni.

"We do an amazing ragu. Organic beef from Wisconsin and fresh tomato," he said.

There's more than pasta at this tasty spot. The menu includes a soft, pillowy focaccia with a side of creamy ricotta and honey, and a tart, crunchy salad of shaved fennel and bright, fresh citrus.

Monni said every recipe is a shout-out to his upbringing in Italy.

"Bringing back my childhood, the cooking that I'm selling here. It's something I used to do when I was young. It's a bring back of childhood at the present time," said Monni.