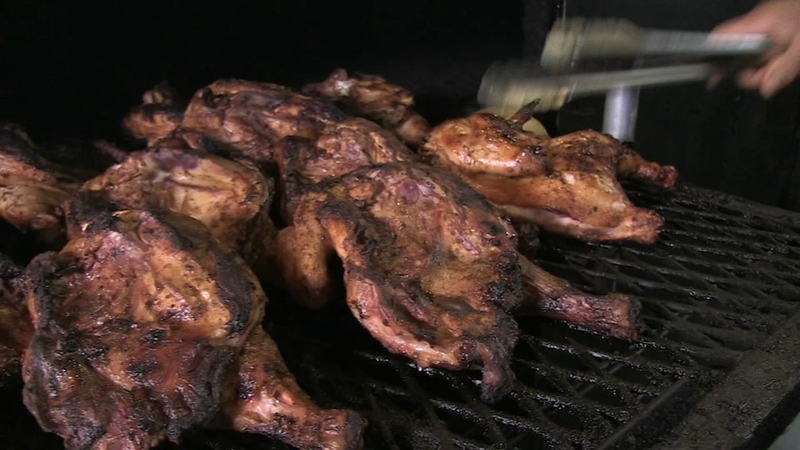 EVANSTON, Ill. (WLS) -- There are several Jamaican restaurants scattered throughout the city with most of them clustered in two polar opposite sides of the city. You can find them either on the South Side or near Rogers Park.

Our Hungry Hound Steve Dolinsky said one of those North Side spots recently re-opened across the street in Evanston with a larger space and expanded menu.

In Steve's Extra Course Video, he takes a look at another dish they serve - ackee and saltfish - which is actually more of a beloved dish in Jamaica than jerk.

But he said the one thing to still focus on is the jerk chicken.

Jerk chicken was created more than 300 years ago, as African slaves fled British troops into the hills of Jamaica.

The dry rub is based on what was available, namely fiery scotch bonnet peppers and allspice, the only spice that's native to the New World.

Centuries later, the rub and cooking method are still being used. Modern cooks might not be smoking over long stalks of pimento wood anymore, but the seasoning for the rub and marinade remains the same.

At Good To Go Jamaican Cuisine, on the southern edge of Evanston, a brand new space gives the kitchen a lot more room to replicate traditional recipes.

"We bought this place, we renovated and we want to stand out differently in the Jamaican community," said Good To Go's owner, Tony Levy.

Levy's grandmother provided many of the recipes, including the jerk sauce.

"Scotch bonnets is one of them; scallions, allspice, I got celery, carrots to give it some body; thyme," Levy said.

Lots of fresh thyme, actually. Also chopped white onions and carrots for some body. Plus, a healthy amount of fresh garlic. Everything is placed into the bowl of a large blender, into which Levy also adds cider vinegar and soy sauce to add acidity and some umami.

The puree is then transferred into a bowl to use for coating some cleaned and seasoned chicken. It's rubbed into every possible crevice, and left to marinate. The chicken then goes into a large smoker, where it cooks slowly for about an hour.

"You have to have a grill with some form of charcoal or wood to give it that flavor," Levy said.

Half chickens are transferred to a cutting board, where they're quickly dispatched into manageable pieces, served with sides like beans and rice, sauteed cabbage or plantains. Better yet, they'll serve extra sauce on the side for dipping and draping, and if you really like it, pick up a bottle to go.

"Anything you put it on, it is so tasty," Levy said.

Levy said it was a lot of work to replicate his grandmother's exacting recipe, but he said she approves of the results.

"She's already proud because it's the best thing that I ever do is when she gave me that recipe and I stuck with it," Levy said.