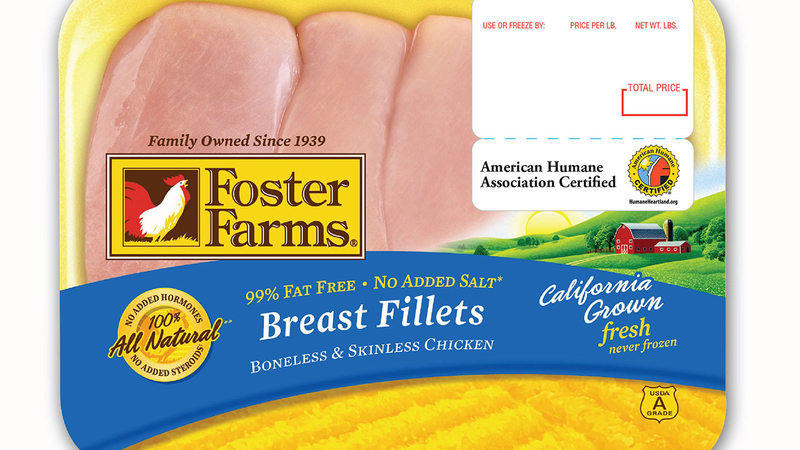 FRESNO, Calif. -- An undercover video taken by animal rights group Mercy for Animals shows the apparent mistreatment of chickens at a Foster Farms poultry slaughterhouse in Fresno and at three poultry farms in Fresno County.

It is hosted by former game show host and animal welfare advocate Bob Barker. We can't show you the worst of it, but Mercy for Animals spokesman Matt Rice describes what it reveals, "Many Foster Farms workers engaged in deliberate and intentional acts of malicious cruelty, punching, beating chickens as well as ripping out their feathers." And he said the rough treatment and fast pace led to cruel deaths.

"Many of the birds were improperly shackled, and as a result they didn't have their throats cut prior to being scalded alive in the feather removal tank," said veterinarian Armaiti May.

The video also showed some workers roughly dumping trays of baby chicks. May acknowledged all poultry slaughtering operations are unpleasant, but said this was worse than it should be. "As a veterinarian there is no doubt in my mind these animals suffered terribly," she said.

But from Washington, D.C., American Humane Association spokesman Mark Hubis told Action News the video came as a shock and such mistreatment was rare. He said his agency is investigating and noted Foster Farms is taking action. "We've been in contact with Foster Farms today and we've already heard they are planning on retraining workers on the live hang line and those working with chicks," said Hubis.

The animal cruelty charges have been turned over to the Fresno County Sheriff's Office, which released the following statement:

"The Fresno County Sheriff's Office is aware of the allegations Mercy for Animals is making against Foster Farms and we are looking into the matter. The investigation is ongoing and detectives do not have any specific details to release at this time."

Mercy for Animals says the fault for this cruelty lies with the grueling pace the employees are forced to work under. Rice said the speed employees are required to work under makes it impossible for them to treat the animals gently, and he said he believed killing animals takes a psychological and emotional toll on the workers. "Talking with workers they will tell you they have to learn to hate the animals in order to go to work every day and kill thousands of animals every day," said Rice.

Foster Farms issued the following press release regarding the video:

Foster Farms has been made aware of an online video showing company employees in Fresno, California, mishandling birds in their care. We have already begun a comprehensive investigation to determine the source and location, including a fully cooperative effort with all appropriate authorities. The behavior of the individuals in this video is inappropriate and counter to our stringent animal welfare standards, procedures and policies.

Since its founding in 1939, animal welfare has always has been a top priority for Foster Farms. We believe raising chickens humanely is simply the right thing to do, and we take our commitment to humane values very seriously.