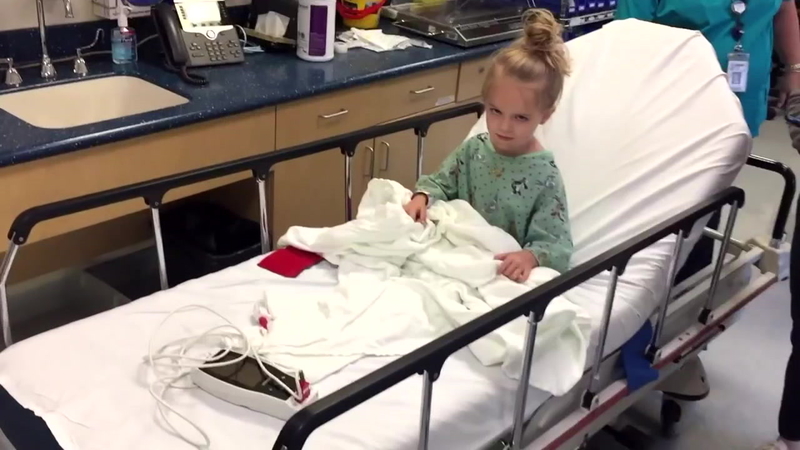 SEATTLE, Washington -- A dentist made a life-saving discovery during a 4-year-old's appointment.

The discovery began with several loose teeth, which is unusual for a child Hunter Jones' age. Dr. Harlyn Susarla asked for a panoramic X-ray, which revealed the growing tumor.

The family went to Seattle Children's Hospital, where a surgeon took a biopsy, confirming cancer. It was neuroblastoma.

"This is such an aggressive disease process. Early recognition and diagnosis is the key, I think, for treatment," said Dr. Seenu Susarla, a Seattle Children's Craniofacial Surgeon. He credits the dentist with the early catch - a dentist who also happens to be his wife.

"I've always been proud of my wife," Seenu said. "She's certainly a lot smarter than I am, and this is just one more piece of evidence that suggests that."

Both doctors Susarla were part of a large care team to treat Hunter over the next year and a half.

"We found out she had a tumor in her abdomen," her father Jay said. "And it spread to her hip as well."

Over the next year, Hunter would spend 140 days at Seattle Children's.

It was brutal. But Hunter's parents say she never wavered, bravely facing each obstacle until they finished a few weeks ago.

Completing treatment meant she was finally able to return to the place it all started for that thank you.

"The fact that this was something that was found in the dental chair, I'm grateful that I saw this and that she was able to get the care, the treatment that she needed," Harlyn said. "Honestly, I probably think about her every day."

Hunter put the final touches on a card, with a heartfelt message for her dentist.

"I'm so thankful for you," Kara said. "You saved our daughter's life."