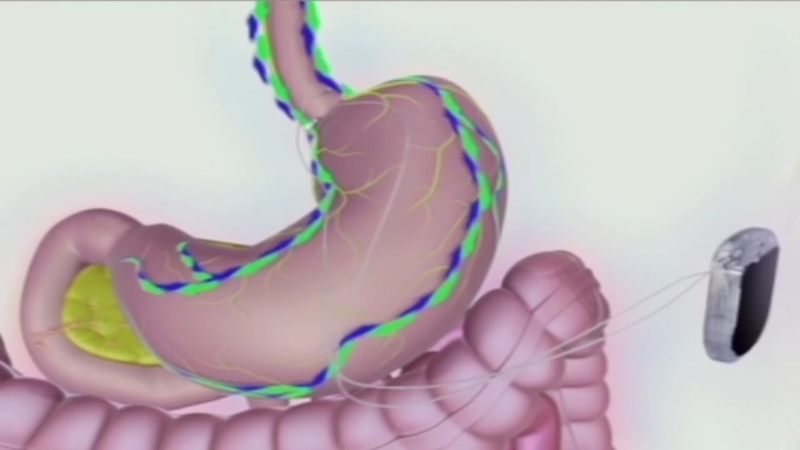 MINEOLA, N.Y. -- A recently FDA-approved procedure will make weight-loss surgery available to people who may not have been candidates for gastric bypass and other weight loss surgeries.

For Laura Adams, 50, the surgery is life or death.

"I developed cardiomyopathy and I was excessively tired," she said. "I would sleep 18 hours a day."

Am I a candidate for vBloc Therapy?:

The excessive weight Adams gained during the past 15 years, as well as its health implications, forced her to explore weight-loss surgery options. She opted for the new route, and became the first person in the Tri-State area to undergo the VBloc Therapy. It is the first major advance in bariatric weight-loss surgery in a decade.

"It's a breakthrough because most of the procedures we do, alter in some fashion, the stomach," said Dr. Colin Braithwaite, chair of surgery and chief of bariatric surgery at Winthrop-University hospital in Mineola.

Braithwaite said instead of altering the gastrointestinal tract, a device much like a pacemaker is implanted under the skin. "It then transmits signals from the stomach to the brain that provides the sensation of being full," he said.

Adams said that she is able to continue eating, "the same things that I ate before. It's just my brain will tell I've had a meal and I'll eat way less."

She said she is hoping it will help her lose at least 100 pounds in the next year in a half. It's a goal that could be possible.

U.S. Food and Drug Administration studies have shown that people can lose about 25 percent of their excess weight and some may lose more, depending on the patient and how the device is used. But Braithwaite warns it doesn't come without its risks.

"Surgery is surgery," he said. "And some of that risk may not have anything to do with the surgery itself. It's the fact that someone is going to be under anesthesia."

For Adams, it's a risk she's willing to take. "I'm hoping to get the weight off and start running again," she said. "Playing tennis, dancing in the clubs again."

The makers of vBloc say the procedure is available in Houston. The first person to undergo the surgery here will be scheduled in the next few weeks.