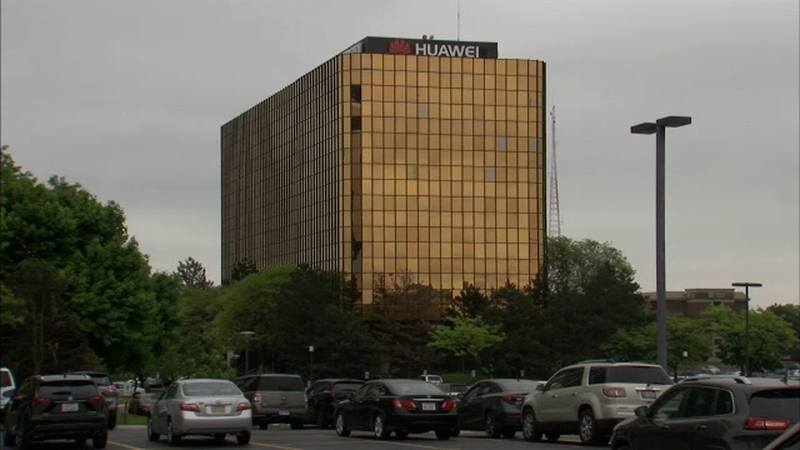 CHICAGO (WLS) -- A techno-era ago, in 2002, long before 5G was on the public radar, top secret data began disappearing from Chicago-based Motorola.

Eventually, company investigators said they traced the thefts to employees - corporate spies who were working from the inside.

Among the accused Schaumburg thieves, Hanjuan Jin, was convicted and sent to federal prison.

Then, in a 2010 civil lawsuit, Motorola asserted that Chinese electronics giant Huawei was intimately involved in an expansive scheme that included Jin and her efforts to steal company secrets.

According to the suit filed in Chicago federal court, "Huawei knew or should have known that the 'products' and proprietary technology being brought to China for 'presentation' to the founder and chairman of Huawei were acquired and derived from misappropriated Motorola trade secrets and confidential information by full time Motorola employees."

Huawei denied the allegation that it used Motorola employees, including Hanjuan Jin, to steal secrets and deliver them the data.

The suit was settled and Huawei continues to strongly dispute any involvement in corporate espionage or the Jin case.

"Huawei is irrelevant to Hanjuan Jin's conviction" Rob Manfredo, director of corporate communications for the Chinese tech giant told the I-Team, on Monday. "While it is true, that Motorola filed a civil complaint naming Huawei as a co-defendant before Jin was tried, all claims against Huawei in that civil case were voluntarily dismissed following the settlement between Huawei and Motorola, and there was no finding by the court of any Huawei misconduct" Manfredo said in an email to the ABC7 I-Team.

Although the civil lawsuit was settled outside of court without a trial and the details sealed, Manfredo points to a joint press release issued by both Motorola and Huawei at the time. "Huawei acted properly and above board at all times and developed its products independently and without the use of any Motorola trade secrets" stated Guo Ping, Vice Chairman of the Board and Executive Vice President of Huawei in the April 13, 2011 press release.

Motorola Solutions president and CEO Greg Brown stated in the same release that "We regret that these disputes have occurred between our two companies. Motorola Solutions values the long-standing relationship we have had with Huawei. After reviewing the facts, we decided to resolve these matters and return to our traditional relationship of confidence and trust. I am pleased that we can again focus on having a cooperative and productive relationship."

Huawei, that has rapidly expanded to foreign markets including the U.S. and now stands poised to command the global 5G market, has fought allegations of working on behalf of a foreign government for years.

"They say the government is substantially funding us-neither of which has any evidence that has ever been produced in support of that perspective" Purdy said.

The evidence against Ms. Jin was overwhelming. She was caught by federal investigators at O'Hare airport in 2007 carrying Chinese military catalogues and stolen Motorola technology. According to the federal indictment Jin had bought a one-way ticket to Beijing a few days earlier and was boarding a flight when she was stopped for carrying $30,000 in cash after declaring she only had $10,000.

Investigators said they found 1,300 electronic records and paper documents belonging to Motorola in Jin's possession-some stamped confidential. Schaumburg based Motorola estimated the stolen data was worth $600 million and destined to snake its way through an elaborate spy system right into Huawei's computers.

Jin told the I-Team in 2008 that she wasn't a spy, stole nothing, had tuberculosis and was going to China to visit her ill mother.

"The federal government is saying basically that you're a corporate spy. What about that?" Jin was asked during the interview with ABC7 investigative reporter Chuck Goudie.

"You're not a spy?" Goudie inquired.

"They made a mistake," Jin said.

During a bench trial in 2012, a federal judge didn't buy her claims. Jin was convicted of stealing trade secrets and sentenced to four years in prison.

Judge Ruben Castillo did acquit Jin, a naturalized American citizen, of economic espionage charges. However, Judge Castillo said that she "was willing to betray her naturalized country"-the United States.

More than two weeks after the I-Team report, Huawei officials contacted us asking that their view of the lawsuit and the criminal case be included in this story. "There's no evidence in that case that Huawei had any connection with Hanjuan Jin's conduct" said chief spokesman Manfredo. He pointed to a 77-page order in which Judge Castillo "who heard the evidence concluded that the Chinese company involved was Sun Kaisens, not Huawei; in fact, because of the lack of any evidence of Huawei's involvement, Huawei is not even mentioned in the judge's opinion" said chief spokesman Manfredo.

Jin, a graduate of the Illinois Institute of Technology, had worked at Motorola as a software engineer since 1998. She was released from prison in 2017.

Now 48, Jin has an address in Chicago's Streeterville neighborhood. She did not reply to repeated I-Team messages, emails and letters. Her attorney in the criminal case, Thomas Breen, told the I-Team that he has had no contact with her for years.

Even as Huawei defends its corporate motives and claims no control by the Chinese government, U.S. officials ramp up a public campaign aimed at discrediting China's government-backed tech industry. Top Trump administration officials say that Chinese intellectual property theft has cost the American economy billions of dollars in revenue and thousands of jobs. They say it threatens U.S. national security.