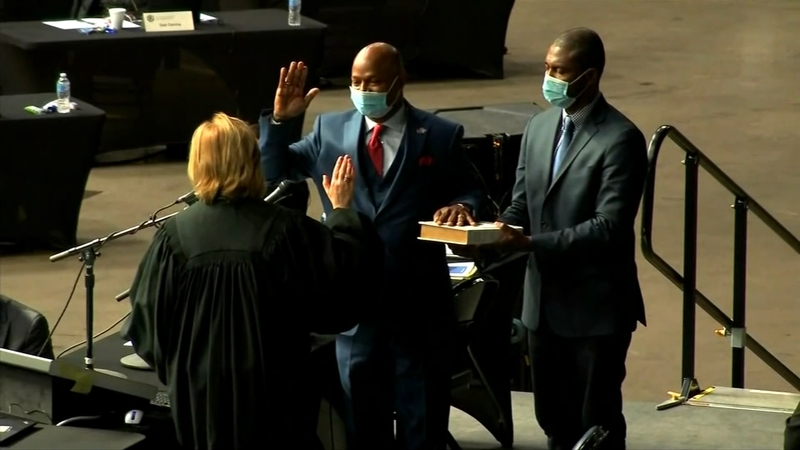 CHICAGO (WLS) -- One year ago this week state lawmakers made history in electing Emmanuel "Chris" Welch as the first Black Speaker of the Illinois House, taking over from his longtime predecessor Mike Madigan.

Welch had a big pair of shoes to fill when he took the reins from Madigan who had served as Speaker for nearly 40 years before stepping aside under the ComEd corruption cloud last January.

"Well, we're definitely two different men with two different styles. I think if you talk to rank and file, Democrats and Republicans, they will tell you that the chamber is a lot more open, a lot more accessible," said Welch.

But no more friendly to Republicans according to House Minority Leader State Rep. Jim Durkin.

"Speaker Welch promised a new day where Republicans would collaborate with Democrats on every major issue. Unfortunately, none of that happened," said Durkin.

In a chamber where Democrats hold a super majority Durkin complained Republicans were shut out on the budget and the remapping process.

"Illinois is a two party state. However, the other party in this state has gotten out of touch with voters. And I think that shown up at the ballot box," said Welch.

But in mid-term elections the party in power very often loses seats.

"We're certainly aware of the political climate as we enter election season here in 2022. And what we have to do as Democrats is we have to do the work," said Welch.

Welch said Democrats can tout to voters successes on the climate and equitable jobs act, and legislation to protect voting rights and women's reproductive rights.

Welch said he'll work hard to keep his super-majority, but for now is focused on the upcoming legislative session.

"Then we will obviously, worry about the election results after the election and let the members of the General Assembly determined what we do next with with my speakership," said Welch.