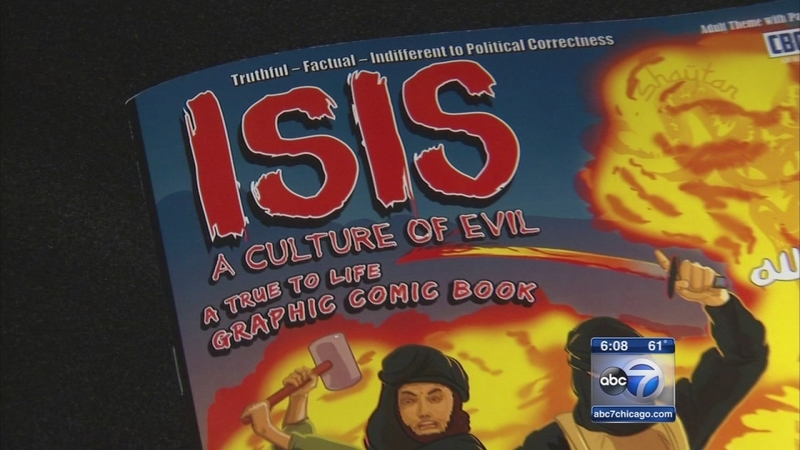 CHICAGO (WLS) -- As America honors military veterans Wednesday, one of the nation's current enemies is being targeted with an unusual offensive weapon: the coloring book.

The anti-terrorist coloring book is called "ISIS: A Culture of Evil." It's a graphic depiction of the group's ruthless methods and violent outcomes, and offers a counterbalance to recruiting magazines put out by terrorist organizations themselves.

The coloring book producer tells the I-Team he has received calls from members of the military and from Muslim Americans praising the effort.

"This isn't one of the most pleasant books our company has ever produced. But a lot of people have told us over the years they would like to see something that is just absolute, unabashed, that's truthful; that's factual and indifferent to political correctness," said Wayne Bell, CEO, Really Big Coloring Books.

Black and white line sketches that make up the ISIS book show mass murders, people being tortured with sticks, acid thrown in women's faces and foreboding headlines such as "Break the rules of ISIS and you will die!!"

The book states that "ISIS will send soldiers to your shores," and asks "Who will stop ISIS before they stop you?"

The counter-terror coloring book, produced by this company in St. Louis, is in contrast to flashy recruiting magazines put out by some foreign terrorist groups.

As the I-Team first disclosed in 2010, al Qaeda had produced and distributed a sleek online magazine called "Inspire" that targeted young American Muslim men. It encouraged them to undertake personal jihads in Chicago and other U.S. cities using easily obtained weapons and homemade explosives.

The Boston Marathon terrorists are among those that authorities believe cooked up bombs using a recipe in "Inspire." This could be considered the anti-"Inspire."

The book salutes mainstream Muslims around the world who stand against ISIS.

The end frame displays happiness in a "world without terrorism" and provides lists of human rights groups and other organizations that are working to stop terrorism with ways for readers to contact them.

There is a warning on the cover of the coloring book stating it isn't intended for children. But the CEO says he hopes parents will share it with their children as a teaching tool. The publisher says he's not a political person and that most of his business is "fun educational stuff like dinosaurs, ABC's, butterflies and animals."