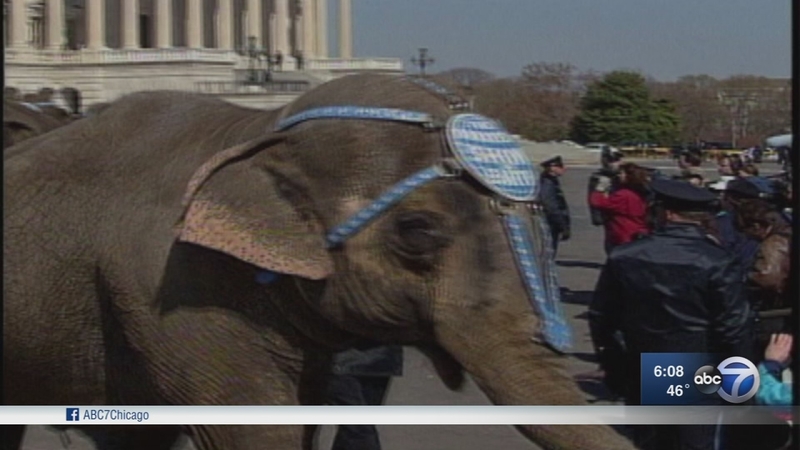 This weekend's last show on earth for "The Greatest Show on Earth" has been in the making for 22 years, since a series of I-Team reports questioned whether elephants at Ringling Brothers and Barnum & Bailey Circus were "Tamed or Tortured."

Ringling's final circus show after 146 years will take place on Sunday in New York; an American institution that made annual visits to Chicago and the suburbs, finally defeated by changing consumers, rising operating costs, a long legal fight and the steady drumbeat of animals rights activists.

The circus was founded in Wisconsin in the late 1800s. Now owned by Feld Entertainment, ticket sales have nosedived in recent years.

One allegation of animal abuse led to a 14-year court battle with animal-rights groups, who, it turned out, had bribed a former circus producer nearly $200,000 to make false accusations about the circus's treatment of animals. The groups ended up paying Feld a total of some $25 million in settlement costs.

Nevertheless, questions remained and local anti-elephant ordinances passed across the country. When Ringling Bros announced in 2015 that it would phase out its herd of performing elephants, it ended up being the circus' death knell. Many remaining circus fans stopped attending shows altogether and the tide of ticket sales continued in a free-fall.

In better days, Ringling was a live entertainment force in the U.S. with several touring shows and three-ring tents that sat 12,000 people. Elephants were always a main attraction and the most popular, sustaining feature of the shows.

"It's sad that it ends and all the wonderful people that make up 'The Greatest Show on Earth'," said Kenneth Feld, CEO Feld Entertainment. "On the other side of it, we have to be very happy that for 146 years, we've been able to bring that kind of joy to hundreds of millions of people that we have."

During the I-Team's 1995 series entitled "Tamed or Tortured," videos revealed the tactics that handlers allegedly employed to make elephants perform circus stunts. Animals rights organizations, long outspoken critics of the use-and they say abuse-of elephants continued to protest even after the elephants were retired-citing the misuse of other animals including lions, ligers, horses and kangaroos.

Feld Entertainment and circus' workers have long denied any claims of animal mistreatment and to the bitter end have continued to maintain that their animals were well cared for and trained using verbal cues and positive behavior reinforcement. Even though a circus spokesman says homes have been found for all of the approximately 50 animals still with the show, protesters plan to be at Ringling's final performance on Sunday.

Sandor Eke, the "Boss Clown" at Ringling Bros and Barnum & Bailey Circus, said "As a clown you can't be really sad and sensitive, you have to always give all of your energy, your happiness to the forum. Sometimes it's really difficult because the audience is asking us: How do you feel? What are you going to do? And that's the moment where it keeps hitting you. Gosh! Actually we are closing."

In a nod to the cultural changes that may have contributed to the collapse of the live circus, Sunday's final Ringling performance at the Nassau Coliseum in New York will be streamed as it happens on Facebook.

When the circus first performed in 1871, Facebook was still 133 years from being founded.

An investigation by the ABC7 I-Team in 1995 reveals the tactics employed by circus trainers and animal handlers to control elephants and teach them so-called "tricks."

An investigation by the ABC7 I-Team in 1995 reveals the tactics employed by circus trainers and animal handlers to control elephants and teach them so-called "tricks."