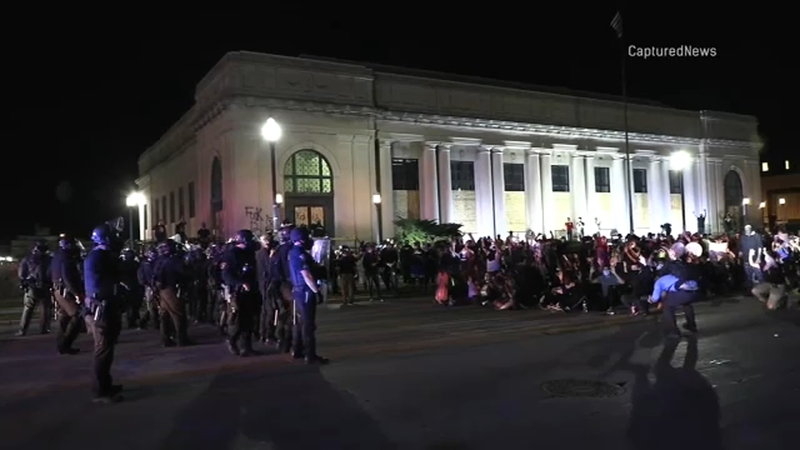 Kenosha residents voice frustration over nights of violence and unrest

KENOSHA, Wis. (WLS) -- Residents in Kenosha brace for the possibility of another night of unrest after the police shooting of Jacob Blake, a Black man in Wisconsin.

Many say they are frustrated with what's happening in their city and are concerned there could be more violence Wednesday night.

"With trauma, you can't dictate how people are going to deal with the trauma," longtime Kenosha resident Charelle Brown said.

"It hurts my heart when I go into my communities and I have seen places that I have gone all my life boarded up," added fellow resident Rochelle Anderson-Moore.

For the past three nights, violence has erupted in the city just north of Chicago, causing chaos on the streets, including a shooting that left two dead and another injured.

"The individuals who lost their lives last night and the ones clinging their lives matter too," said Bishop Tavis Frant with the Rainbow Push Coalition.

The chaos also played out within the county government Wednesday. A dispute erupted over a Kenosha County Board of Supervisors press conference that criticized local leaders and Governor Tony Evers' handling of the events.

Andy Berg says he and several other supervisors were not notified about it.

Supervisors who did participate in the press conference say they're pleased the governor has authorized more members of the Wisconsin National Guard and that the president is offering federal assistance.

"Myself, my colleagues, I feel most of the community is grateful that President Trump has offered these resources and the governor has finally gotten to this point of accepting it," said fellow board member Zach Rodriguez.

"We are not Portland. We are not Seattle. We are not Minneapolis. We are not going to stand by and allow this community to be destroyed and people's lives taken or injured," added Terry Rose, who is also on the board.

The Kenosha police officer who shot Jacob Blake was identified by city officials Wednesday night as they provided more details about the incident.