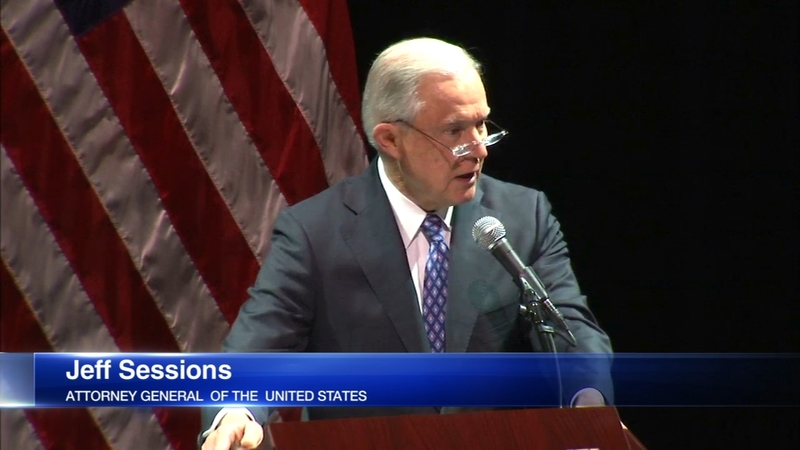 Sessions visited the 15th District Police Station to tour the Strategic Decision Support Center, which police use to track gunshots, monitor street corners and use predictive analysis information to deter crime. That technology was partially paid for with federal funds.

CPD representatives said Sessions seemed impressed with what he saw.

But it was the city's crime problem that Sessions seems to have noticed, despite the 19 percent drop in murders and shootings since last year.

After the visit to Austin, Sessions attended a previously scheduled speech at the Survive and Thrive Conference in Waukegan.

At that conference, Sessions addressed Chicago violence and blamed the ACLU for 2016's uptick in violence.

"Accepting this status quo of death and crime because it's confined to a few neighborhoods not responsible or moral," Sessions said in Waukegan. "This storied city cannot capitulate to the violence."

Sessions called Chicago the most dramatic example of the nationwide rise in violent crime that took place between 2014 and 2016. He also blamed leaders for what he sees as a decrease in policing that lead to more shootings after a 2016 consent decree put an end to "stop and frisk."

"In 2014, the police here came under intense criticism. A year later, the ACLU issued a report on 'Stop and Frisk in Chicago' and threatened the City of Chicago with a lawsuit-and the politicians went into a retreat," Sessions said. "In the aftermath, the city's leadership rushed into an irresponsible consent decree with the radical activists and the ACLU."

"Colossal mistakes have been made by political leaders, politicians and others, judges that had particular catastrophic consequences for the people of Chicago," Sessions said.

Chicago officials fired back at comments made by Attorney General Jeff Sessions Wednesday.

In a statement, the ACLU responded to Sessions' claims, saying:

"Attorney General Sessions essentially argues that police officers are too scared to do their jobs if they have oversight. This claim insults officers and downplays the harms of unlawful policing. And contrary to his narrative, other cities have required similar oversight for stop-and-frisk without an increase in homicides."

"I know Jeff Sessions is having a tough day with his boss, but it's no excuse for lashing out at others and making up alternative facts," said a spokesman for Mayor Rahm Emanuel. "Chicago has seen significant reductions in violence, and that's exactly why USDOJ wanted the Attorney General to see our police department's strategy and technology firsthand this morning."

The number of shootings and murders in Chicago has decreased 30 percent since the Strategic Decision Support Centers were put into use.

"I think they were here to see what we thought the real problems were and they're going to go back and talk to other agencies and see what we can do about it," said Annette Nance-Holt of Purpose Over Pain.

Earlier Wednesday, President Donald Trump gave sessions another vote of no confidence, saying that he is "really disappointed in the Attorney General for numerous reasons."