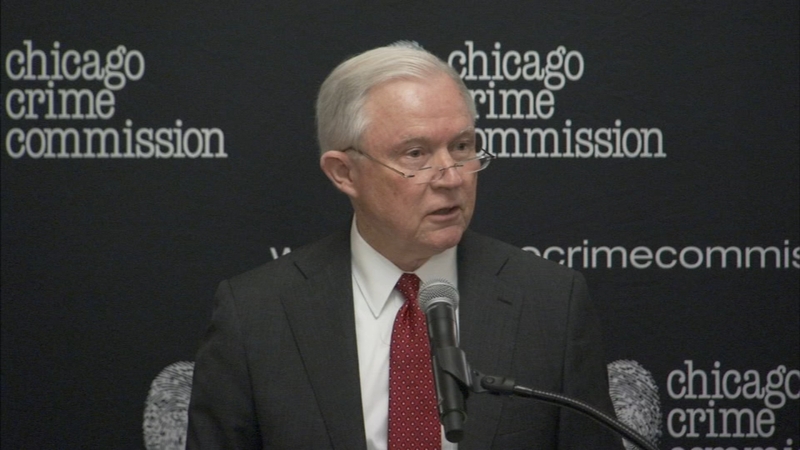 CHICAGO (WLS) -- Attorney General Jeff Session had harsh words for a proposed consent decree to reform the Chicago Police Department during a visit to Chicago Friday. He called it a seductive idea, but a bad one, and said police are not the problem in Chicago, criminals are.

This is the third time Sessions has been to Illinois in the past two months.

He was even more critical of the consent decree than previously, and took a shot at Mayor Rahm Emanuel and Illinois Attorney General Lisa Madigan, whose offices worked together to hammer out the police reform agreement.

Sessions delivered his remarks during a speech hosted by the Chicago Crime Commission.

"A consent decree is an extraordinary remedy and it should be considered only with great caution and only in rare circumstances," Sessions said.

He said Chicago police do not need to be seen as a rogue department because of the actions of a few bad cops.

"Micromanaging the CPD through a federal court order isn't justified; it is an insult to the department," he said.

As Sessions spoke a handful of protesters gathered outside to denounce his visit.

The attorney general not only criticized the 226 page consent decree, but also Emanuel and Madigan, calling them lame duck politicians who colluded on the decree in a power grab before leaving office.

"Will they continue to control the department from their political graves?" Sessions said.

Sessions also blamed a police monitoring agreement with the ACLU in 2016 for the dramatic spike in murders that year.

"Decades of hard-earned progress were tossed away. Police were demoralized. All of America needs to understand this lesson," Sessions said.

"The city has tried to reform itself over and over again for decades and it failed, having a federal court oversee common sense terms that are in the proposed consent decree is the best chance that we have for reform," said Karen Sheley, ACLU Illinois.

Sessions noted that Chicago police have put many reforms in place already, arguing a court agreement is a bad idea. But Superintendent Eddie Johnson said it's needed.

Emanuel suggested in a tweet that Sessions was a hypocrite.